A couple years after moving into our house, we looked out the window above our kitchen sink and realized that, lo and behold, we had a fig tree! It was tucked in the side yard which, at the time, was a big, overgrown mess. I'm not sure the people who lived here before us ever even ventured over there.

Once we realized it was there, we also realized just how many figs one tree can generate. A lot. A lot of figs. All of which ripen within about two weeks.

Then, two years ago, during that first awful winter, the tree died. We were sad and we thought it was gone forever. But no! The next spring, from the middle of the dead branches, new green shoots sprung up. We were thrilled...but we didn't get any actual figs. The tree had some green fruit, but nothing ever ripened.

Last winter rolled around and the tree died again. This time, we thought it was truly over for good. But, once again in the spring, a new tree grew, quickly overtaking the dead branches of the year before.

The tree, which usually produced fruit in late September, once again had lots of little green figs. But given last year's experience, I had low expectations. So imagine my surprise yesterday, when I went out to the tree to replace the old, broken cafe lights with new ones that work, and I discovered a handful of pretty, purple, perfectly ripe figs! 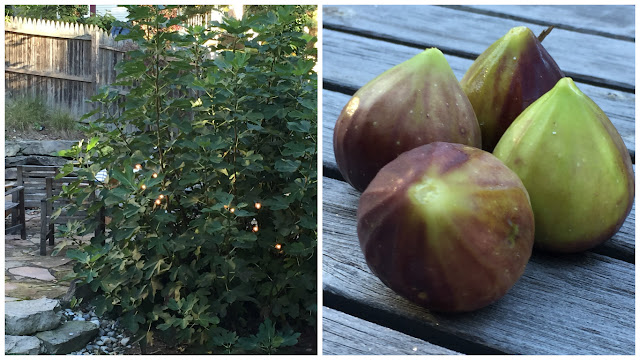 It was just a couple - and all of them came from the sunniest side of the tree. Who knows if any of the rest will ripen (probably not, since this weekend was also our first frost). But what a good reminder that every year, nature refreshes itself, and that hope springs eternal.
Posted by Kit Pollard at 8:56 AM