Back in October, when I wrote about my mom's 65th birthday and Dixon's 8th birthday, I mentioned that around here, fall is birthday season. And is it ever - especially when you let "fall" stretch into early winter.

Since those first two September birthdays, we have been in full-on celebration mode. This is just a taste of the fun. 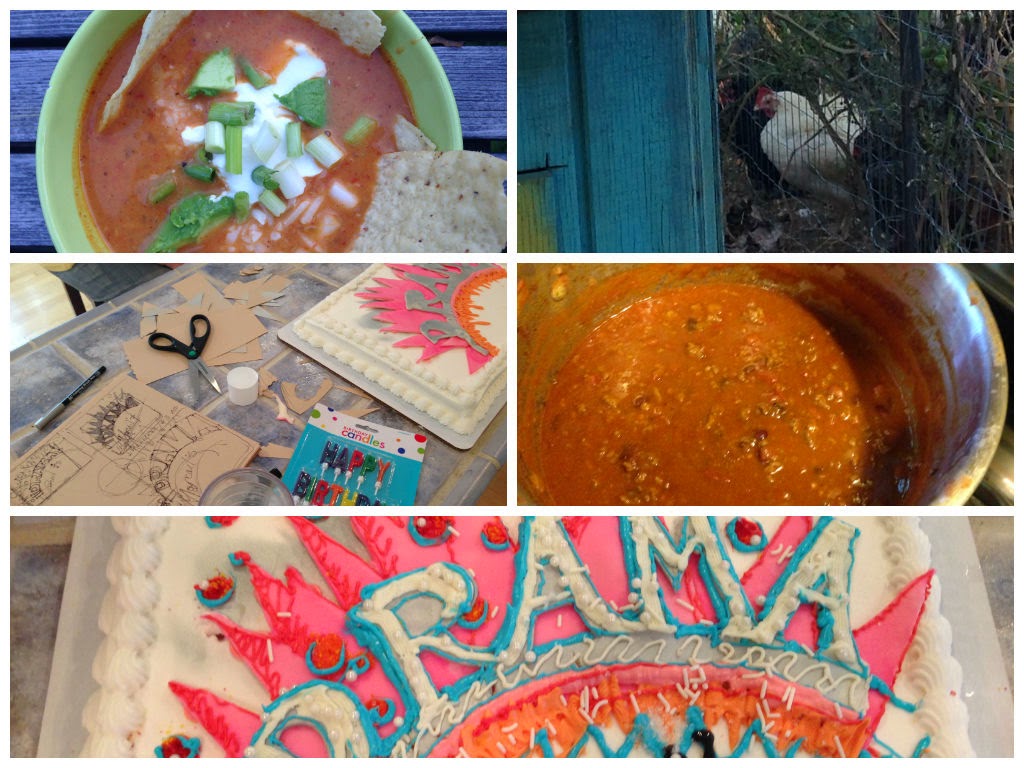 Cooper's mom's birthday celebration was low-key this year but Cail's was a little less so. My parents and I went down to Richmond to visit for the weekend and Cail's parents and her brother came up from New Orleans.

My brother threw Cail a surprise party in the private room at a cute wine bar called Secco and Cail's dad, who has made her birthday cake every year forever, outdid himself with a gorgeous pink and turquoise "drama queen" concoction. Mr. Moran is an architect and very artistic - watching him work was super cool.

Later in the month, we celebrated Nathan and Liz's son's birthday up at their house in the country. It was a gorgeous day to roam around their yard, checking out the chickens and eating their awesome food - including chili, hatch chili queso and root beer braised brisket. Oh, and apple pie moonshine. Because that is how they roll.

To wrap up October, we celebrated Bill's birthday on a Sunday afternoon at our house. I made a big batch of chicken tortilla soup, since it was starting to get chilly...and Bill likes Mexican food. It was one in a long string of fall Sundays that we spent at our house, surrounded by friends and delicious food. I could do that every day. 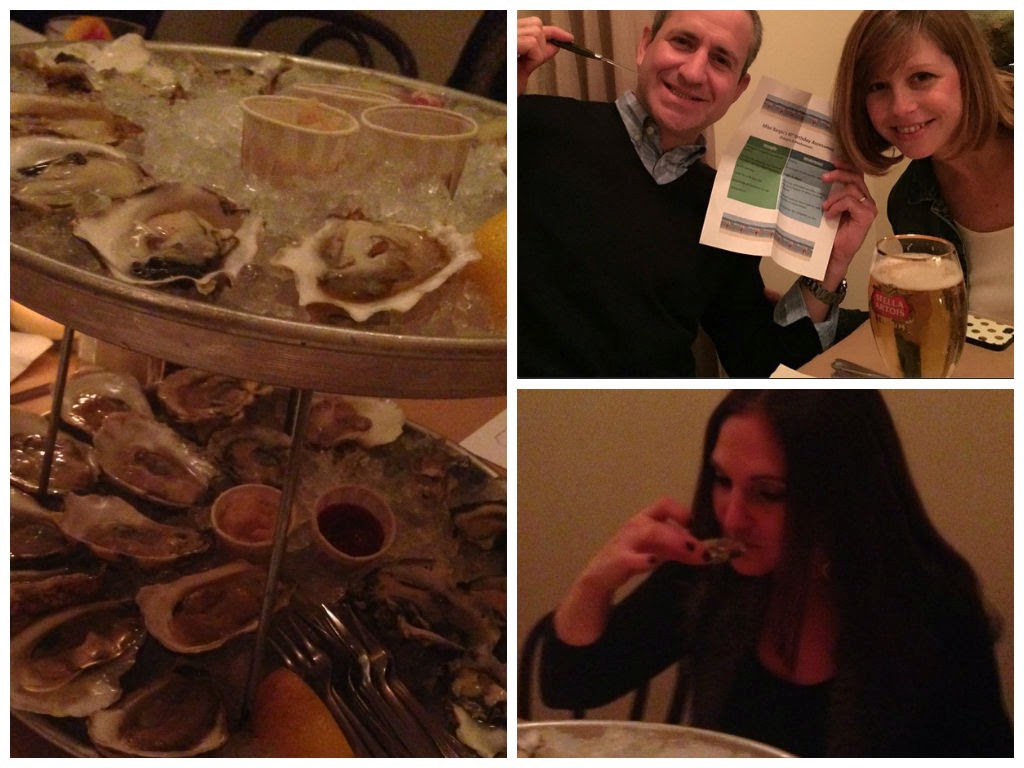 Seafood tower; Mike and I with our gifts; Stacy's first oyster.

In mid-November, Mike turned forty, giving us a great excuse to head to Thames Street Oyster House, where our friend/neighbor Teresa proved once again why she is one of the best servers in the city.

Bill was out of town but Stacy came down from New York, so with the Swartses, we were a group of seven. We did our best to order everything on the menu, including tons of oysters (and Stacy's first oyster ever!) and a suckling pig special that came with a side of oyster and butternut squash dressing. Ridiculousness.

I loved my monkfish entree but my favorite part of the night was a quail appetizer accessorized with chestnuts and quince puree. I absolutely couldn't stop thinking about it. They are so good at what they do there.

The night was funny, too. Alicia asked us each to come up with a story or two to roast Mike. Which...we did. I created a "strengths and weaknesses" roundup that was quite funny, if I do say so myself. I keep telling my friends that I'm funnier than they give me credit for. I stand by that.

December: Cooper, Tom and Me 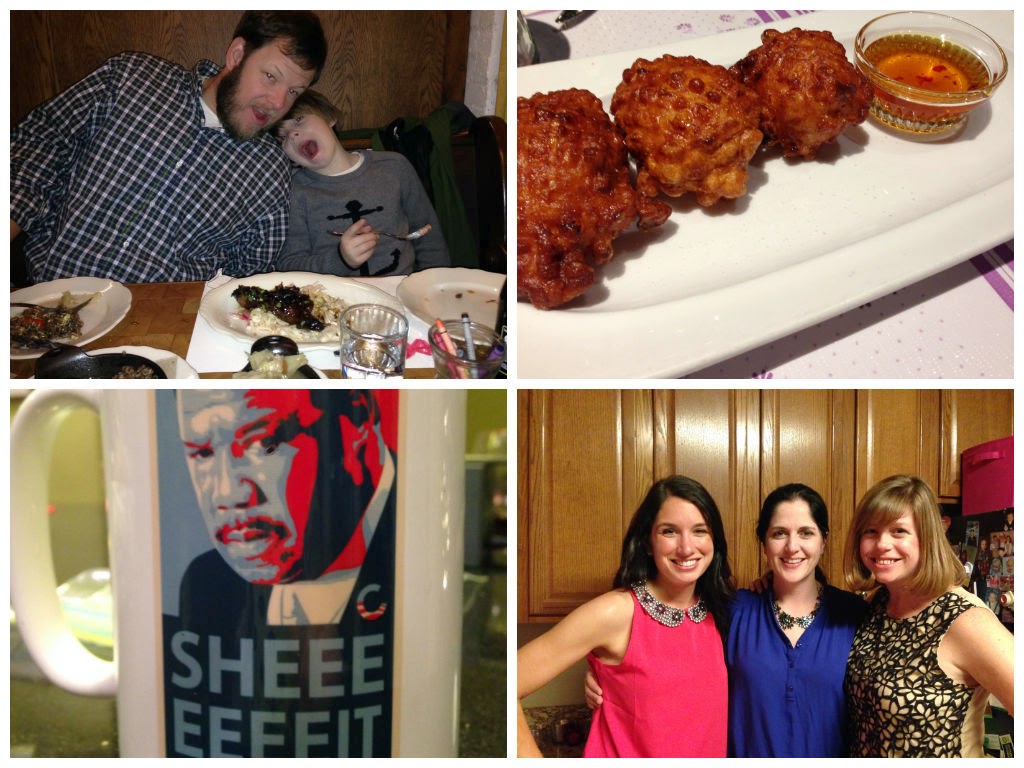 Clockwise from top left: Cooper and Dixon at Parts and Labor; Corn fritters at Shoo-fly; Clay Davis mug from Patrick and Amanda; Me with Suzanne and Alison at Alison's party.

December is an especially busy month around here, with not just Christmas but also Cooper's birthday, Clark's birthday (the same day as Cooper's), my birthday and my brother's birthday.

We didn't celebrate with Clark this year (he was in DC, we were in Baltimore) but we did manage to have a bunch of good meals out. For Cooper's, he and Dixon and I went to Parts and Labor, which was just as good as everyone said it was. Tons of meat, beautifully cooked, in a super cool space. We'd already been to the butcher shop a few times, so we knew what to expect...and we're looking forward to going back

December birthdays are tough, since it's such a busy month. But it's also so much fun. Since we're in celebration mode, I usually get to see friends from all over the place either right before, on, or right after my birthday.

This year, my birthday was on a Monday but the celebrating really started on Saturday night with a party at my friend Alison's house. She's my high school friend and old roommate (from our Canton days) and her husband is one of Cooper's college friends. So the party was full of people I love.

The next day, I made my annual trip to McGarvey's, where a bunch of high school friends came to celebrate with Cooper, Dixon and me. We ate oysters and crab dip and burgers and crab cakes and drank a bunch of Aviators. Just like last year and the year before and many, many years before that.

That night, we came back up to Baltimore and got to hang out with Patrick and Amanda, of Paris fame (they have since moved back to Denver). They came over for crab soup and general revelry - and brought us an awesome Clay Davis mug made by someone they work with. We loved it and it was especially timely, what with the re-release of The Wire.

Finally, on my actual birthday, Dixon and Cooper and I drove through Hampden in the rain, then went to Shoo-fly for dinner and I remembered that I can't get enough of their corn fritters. They come with spicy honey and are just so good.

After Christmas, Tom, Cail, Erin and Clark all came up and stayed with us for a couple days. The 27th is Tom's birthday, so we met my parents at Clementine, where we got to have one last big family dinner before everyone returned to their respective homes.

Some of the Waskoms had been to Clementine for lunch or brunch, but not for dinner - and Cooper and I were happy to introduce them to some of our favorites, like the charcuterie and the basil-lime elixir. We all loved our meals, ending a big visit on a high note. 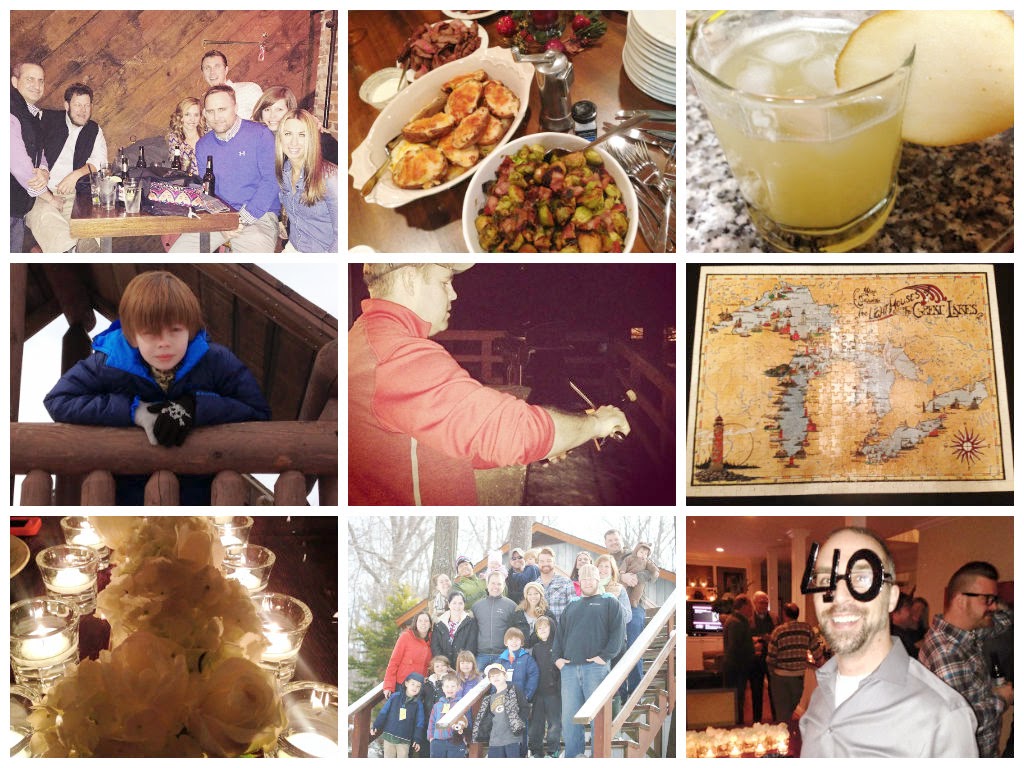 We took a break for dinner at our house on New Year's Eve, then jumped right back into the birthday celebrations. Kyle's birthday is on January 4th - a Saturday this year. Immediately after our great dinner for Mike's fortieth, Kyle announced that he wanted to go back for his birthday. So we did.

Once again, it was fantastic. Alicia got the porgy, which is served standing up and is crazy good. Mike kept it simple with a lobster roll (outrageous) and I ordered against type, getting tuna, which was also delicious. The quail, again, was a show-stopper, as was the octopus, which I can never resist.

After dinner, we went to the Waterfront Hotel to watch the Ravens beat the Steelers (much to Mary's chagrin), finishing the night on an extra-sweet note.

A few weeks later, Cooper and Dixon and I headed off to Deep Creek, to celebrate our friend Bert's fortieth with a bunch of people I've known since high school or longer. (Bert's birthday is in December but we couldn't get it together to go away until January.)

It was four days of so much fun. We ate and drank way too much, did a bunch of puzzles, played some Cards Against Humanity, hung out in the snow, watched our kids bond and retold stories about stuff that happened two decades ago. And, of course, I got sentimental about how lucky I am to have so many great friends from high school and even elementary school.

Last Saturday, we got to celebrate with even more of those high school friends, when we went to a party for another fortieth - this one for my friend Matt. It was at his parents' house, near Severna Park, and was gorgeous. Matt's mom works at a flower shop; she and a friend often do flowers for weddings and they are so good at it. The party was catered by Mission BBQ, so the food was awesome, and was tons of fun, all the way around.

But the celebrations really aren't over. Because this is the year my high school class turns forty, we are in for a year full of parties and big nights out. Which is busy, it's true. But wow is it fun.