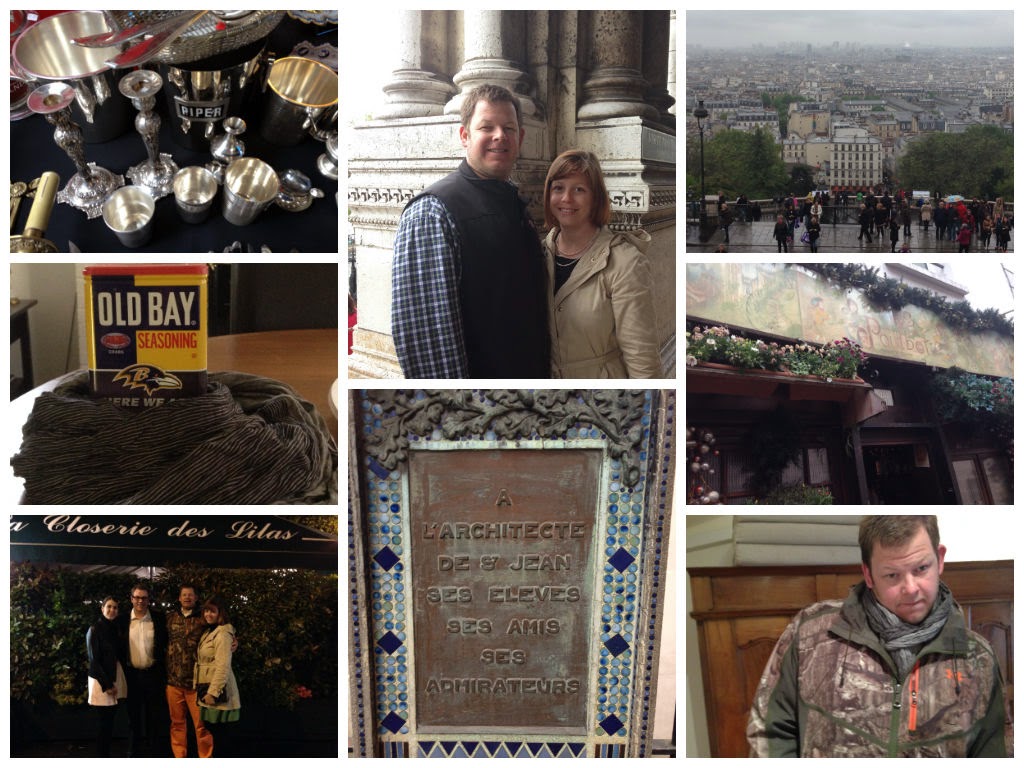 After our semi-raucous Friday night (read: not actually that raucous but we are older than we used to be), Saturday morning came early. And it was raining. We were up and out, though, because we had big plans: Les Puces de Clingancourt. AKA the famous Paris flea market.

But first: breakfast at Les Editeurs. It was the standard petit dejeuner - carbs, coffee, juice - but exciting because the place ties into the neighborhood's history as a literary hub - and we could see it from our apartment window.


I'd been once before and so had Amanda but it was Patrick and Cooper's first time. It was exciting. After Patrick finally dragged himself out of bed and caffeinated, we met at a metro stop and were off to the flea.

A few days earlier on Facebook, Cooper's Uncle Chuck reminded me that for years, our family has had its own name for the Paris flea: Shithouse Village. And for all the amazing stories you hear about the flea (how many Elle Decor articles include the words "found at the flea market in Paris"?) - Shithouse Village is a pretty apt moniker.

The market is a sprawling bunch of structures, some of which seem more permanent than others, and the outside of ring of vendors doesn't sell anything worthwhile. Seriously, we're talking about $3 booty shorts - that type of stuff.

But as you make your way towards the center, there is a lot to love. In the past, I've picked up some great, old artwork and cool antique maps. On this trip, we were after two things: something Buddha-related to give my sister for her 30th birthday...and a cane sword for Patrick. As in, a sword that is hidden in a cane.

We found both. In addition to a bunch of cool furniture, some great linens, and a lot of artwork we didn't buy. We also didn't buy the first several Buddhas we found (no offense, Erin, I love you, but $1,500 seems like a lot for a birthday present, even if it was a milestone birthday). AND we didn't buy any cane swords (again, kind of on the pricey side) - but we did get to check them out and they were cool.

After a couple hours at the rainy flea, we hopped back on the metro and headed to Montmartre, where we did a little shopping (the Biscuiterie de Montmartre was maybe the cutest shop ever), lit candles in Sacre Coeur, and took refuge in one of the neighborhood's less famous churches, Saint-Jean-de-Montmartre. Both churches are mesmerizing and calming - even if Sacre Coeur was packed with people.

After Sacre Couer but before Saint Jean, we took a break for lunch at Le Poulbet, a very tiny, very charming restaurant Patrick and Amanda had been to once before. Funnily enough, nearly everyone in the place was American...I think that's probably what happens when you're located in a neighborhood that tourists love. But still, it had the kind of quirky, almost countryish charm that people associate with France (though not necessarily Paris).

Cooper had foie gras to start and Patrick had escargot; Amanda and I both had onion soup, which seemed appropriate since it was so gray and rainy outside. We had major dinner plans that night but that didn't stop us from taking down half chickens drenched in super-savory brown mushroom sauce (Amanda and me) and duck confit (the guys). We closed out with some stinky cheese and by then, we were exhausted.

After a nap and some packing (on my part), we gussied ourselves up and met Patrick and Amanda at their apartment for a final evening glass of pre-dinner champagne. Then it was off to Les Closeries des Lilas for our final meal - and wow, was it a good one.

Another old Hemingway haunt, Les Closeries is a pretty, pretty place on the Boulevard du Montparnasse. We sat in the glass-walled (and glass-ceilinged) dining room, which was surrounded, outside, by greenery (and where a tree sits, in the middle of the dining room, growing up and out through the ceiling).

Dinner was the kind of refined meal that's perfect for a final night of vacation. Linen tablecloths, well-educated and perfectly charming waiters and sommeliers, someone to make sure your crumbs are swept away between courses (seriously, I am such a messy eater. I love that.).

We started with glasses of Chablis and two types of oysters - our first and only on this trip - with a mignonette so perfect that it had to be French. Sadly, I didn't write down the types of oysters we tried - though I know that six of them were papillons and six were...something else. We didn't order belons, I know that.

Though I don't remember the names, I do remember that they were smaller, more delicate, and less salty than our usual fare. We eat so many big, meaty Chesapeake oysters and super-salty Northeastern varieties that anything on the delicate side is a treat. (Not that I mind salty oysters...I just like a variety.)

After oysters, Cooper and I shared a pigeon pastilla, an old school preparation of pigeon with spices and nuts, wrapped in pastry. The flavor was great and overall, the dish had a banquet-at-a-medieval-castle vibe that I found very likable.

Patrick and Amanda couldn't resist the foie, which is served with bright, pretty mango (as a side note, even though he lives in Paris, Patrick puts away foie like someone who's about to get on a plane to one of those cities where it's banned).

For dinner, Cooper had sweetbreads - he loves them so much - while Patrick, Amanda and I were all a little boring with our orders of Hemingway steak. It's a filet served with a savory brown sauce - supposedly just how Hemingway liked it during his Paris days. After trying his burger, I can see how he'd like the rich sauce that covered the steak. I liked it, too. A lot.

Then cheese. Two milder goat cheeses and one awesomely funky camembert that Cooper couldn't handle (he is not a fan of the stinky cheese). Two cheese-ending meals in one day. So good.

With all of that, we drank a lovely bottle of Chateau La Chapelle-Lescours from Saint Emilion. Then Cooper and Patrick closed out the night with glasses of Armagnac - and we ordered dessert. Profiteroles for us and a "coupe Matisse" for Patrick and Amanda (a sundae of sorts...but way more complicated than that).

And then - even more. A plateful of madeleines and strawberry was our final goodbye and with it, we were off to say au revoir to Patrick and Amanda (who we won't see until next time they come to Baltimore...which won't be until next year) and to head back to the apartment to finish packing and try to get some rest before our Sunday morning flight.

We didn't do a great job on the rest front and our food options in the airport left a few things to be desired (namely cold drinks and friendly service) but the flight, at least, was easy and when we returned home, Dixon was crazy happy to see us.

We were thrilled to see him, too, of course, though also a little sad that the trip was behind us.

Or was it? The nice thing about a trip is that you bring home both souvenirs and memories. And we got to work, immediately, trying to recreate some of what we ate.

Which is a story for another time.
Posted by Kit Pollard at 9:04 PM