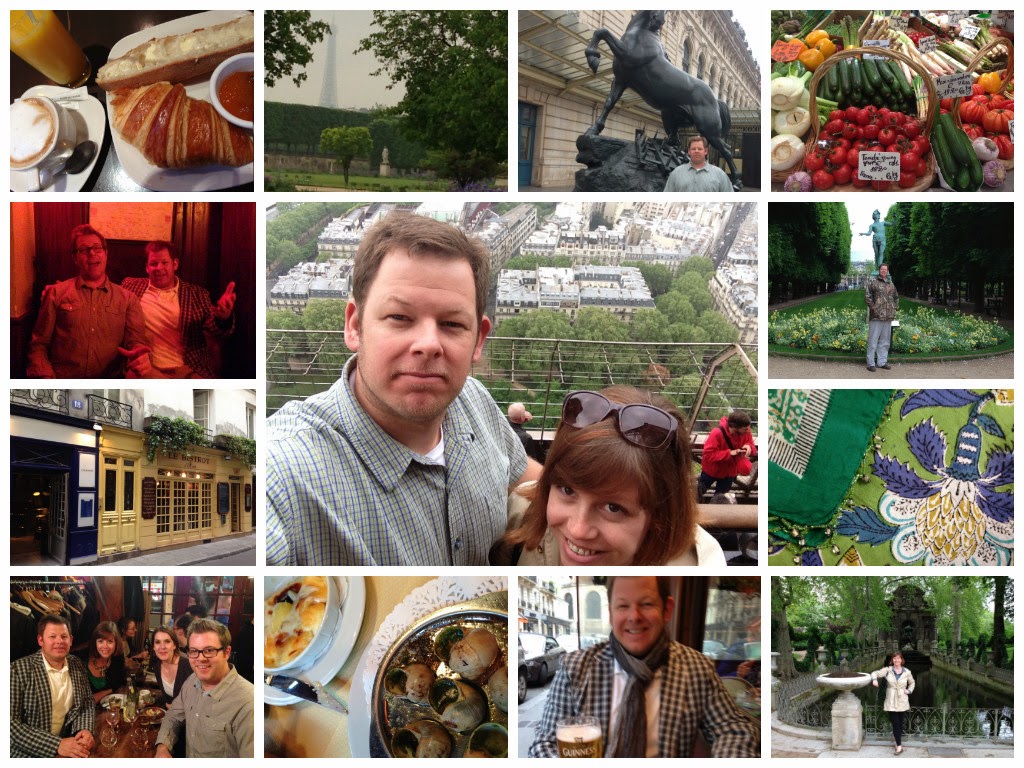 (Clockwise from top corner - also in almost chronological order of the day: Our petit dejeuner, the Eiffel Tower from the Tuileries, Cooper outside the Musee d'Orsay, an indoor market near our apartment, Cooper in the Jardin de Luxembourg, the awesome tablecloth and scarf I got at Simrane, me in the Jardin de Luxembourg, Cooper and le scarf enjoying a pre-dinner beer, escargots and fromages - our pre-dinner snack, dinner at Bistro d'Henri, the outside of Bistro d'Henri, post-prandial festivities)

When we woke up on Friday morning, we were greeted with a gray, semi-rainy Paris. Which happens in April. We persevered, pulling ourselves together and heading out into the mist to grab breakfast at a random cafe near the St. Michel metro stop.

Let's talk for a minute about the French petit dejeuner. I know it's not what real Parisians eat every morning - but I could. It's so civilized and perfectly delicious. Fresh orange juice, a croissant and/or baguette with butter and jelly, and a big cup of coffee? Yes please. Granted, it's not exactly packed with protein...but it is delicious.

After breakfast, we headed over to the Jardin de Tuileries to walk around a bit - it's pretty there. Unfortunately, during the time we spent ambling around the garden, every other tourist in Paris was getting in line at the Musee d'Orsay. That was our next planned stop...until we saw the line.

Instead, we hired a rickshaw bike to take us over to the Eiffel Tower. It was a good move - a nice slow ride through the more governmenty part of the Left Bank. As we rode, it started to rain in earnest, but we were covered.

At the Eiffel Tower, the lines moved quickly but the crowds were kind of oppressive. Our original plan was to go all the way to the top but after seeing the crowd and the line for the elevator on the middle level (where you have to stop), we decided we'd gone high enough. So many people.

After a quick stop back at the apartment (it was getting cold and I needed a costume change), we walked over to the Jardin de Luxembourg, which was only a few minutes' walk from where we were staying. It's so pretty there and we had a good time wandering around - and walking past the first Under Armour-wearing people we'd seen in Paris. They were an American family (unless Parisians have started wearing Penn State hats). When they saw Cooper, in his camo UA raincoat, they started laughing.

Post-Luxembourg, we did a little shopping - most notably the Laduree store and the Simrane shop, where I fell in love with everything I saw. I bought an amazing tablecloth that's actually big enough for our enormous dining room table. We also found a covered market just around the corner from our apartment. We didn't buy anything but still enjoyed checking out all the gorgeous French food.

Mid-shop, we stopped for a quick lunch at the Cafe de Flore - another Hemingway haunt. Cooper had an omelet, I had quiche, and everything was delicious (not a big surprise).

After the shopping, we pulled ourselves together and went out for a pre-dinner snack of escargots and fondue. Then we met Patrick and Amanda at one of their favorite restaurants, the tiny and super-charming Bistro d'Henri.

Dinner was southern French and pretty fantastic. I started with white asparagus tossed with vinaigrette (it was the season), gorgeous chateaubriand, scalloped potatoes sliced heartbreakingly thing and a lovely, eggy clafoutis.

After dinner, we stopped at an Irish pub down the street from the restaurant and had a few post-dinner beers. It was quiet when we arrived and we settled into a back corner - only to be very surprised when we got up for a second round. The bar was packed. A few more beers later, we waded through the (young) crowd and headed back to the apartment.

We needed a good night's sleep...since we had big Saturday morning plans. The flea market!
Posted by Kit Pollard at 10:31 AM