Just over eight years ago, I started this blog. A few months later,
I woke up at 5 a.m., took a pregnancy test, and discovered that we
were going to have a baby.

Food blogging and baby gestating don't mix that well. I took most of the
year off from writing.

Late that September, Dixon was born, not yet realizing
he was destined to have his life documented on the internet.
(To be fair, I actually only document a little bit of it - and even
then, only the good stuff. I never talk about our never-ending
fights about his lack of vegetable eating, for example.)

Anyway, this weekend was his birthday. He's old enough now that birthday
parties are straight drop-off - and he opted to have a boys-only
party for the first time ever. 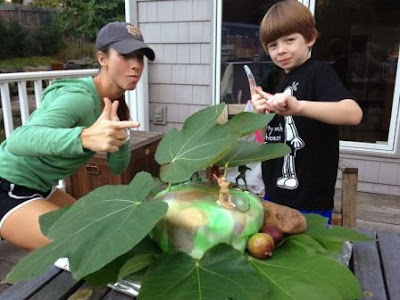 As per usual, Dixon and Alicia collaborated on the cake - and it
truly was a work of art. The decorating took place in a flurry
of fondant and frosting spray paint, with a few fig leaves and figs as garnishes.

After the boys-only party, we hosted a second round of celebrations,
this time with our families and a couple friends. D and Alicia
made another cake for this party - one that was more of a
free-form glitter bomb: 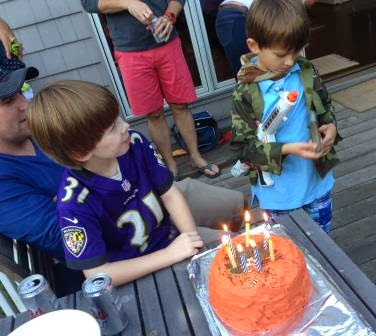 Admittedly, the second cake wasn't quite as exciting as the first -
you can see that Grayson is more interested in weapons and even
Dixon isn't paying much attention to his lit candles.

But slathered in homemade buttercream, it was better than cake #1.

This was Dixon and Alicia's fourth cake collaboration -
they've been decorating together for more than half of
Dixon's life! It's special for him - something he really loves.

Which makes me think I should put Alicia on "get my kid to eat
vegetables" duty, too.