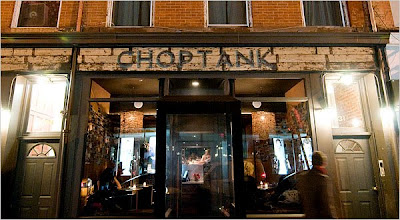 Last night, Cail sent me a link to a NYT review of a Greenwich Village restaurant called Choptank.

The restaurant seems to be a mediocre spot with great fries (Thrasher-style), supposedly good crab cakes (I'd have to taste them first to confirm) and some lacrosse sticks on the walls.

I like a lacrosse stick as much as the next Severna Park girl, and Old Bay is certainly my favorite spice, but I'm surprised that there's a market for this sort of thing anyplace outside of, well, Maryland.

Also surprising: the reviewer's reference to cream of crab soup as "crab chowder" (he doesn't seem to know that it's also a Maryland specialty) and the fact that Natty Boh doesn't ship that far north. And the reviewer's suggestion that Hopkins dorm rooms are great examples of preppy Maryland decor (apparently the reviewer believes the JHU lacrosse team is typical of its student population?). But I do like that the crab dip is described as "out of a Junior League cookbook," since the Annapolis Junior League cookbook is exactly where I'd look for any crab-related recipe.

Sadly unsurprising, though: multiple references to The Wire. But I should be used to that by now, shouldn't I?

wow, so a hopkins lacrosse player opened a restaurant in NYC...I will have to send this to my (hopkins alum, but not a lacrosse player) husband. he will be amused!

I read about this place recently too and I almost want to go sneer at it when I'm in NY in April.

Read a review of the same place in the Village Voice that a) was a little less snooty, b) liked it a little more, and c) had the obligatory Wire reference.

The biggest "amusement" I had was the "crab chowder" which is - well - just a bastardization. And the description of a JHU student's dorm room.... uh, yeah, that wasn't my dorm room. I appreciate the effort, but this place sounds like it isn't real enough to be Baltimore. Nice try, though....

This is very amusing to me! By the way Hopkin's dorm rooms, preppy Maryland decor? I think they may need to rethink that. I think Loyola may have the preppiest dorm rooms. After all, when I was there they called it J.Crew U!
BTW: Crab Chowder, seriously!