Closing Out 2015: Stuff I Loved at the End of the Year

As is often the case, I've got a list of posts-to-write that's a mile long. Over the past two months, especially, I've done a million fun things and eaten some great food and while some of it has made its way to Instagram or Facebook, I'm way behind on actual blogging. I managed to write about a couple fun nights...but I'm still way behind.

And that means a roundup post. Here's what else I've been up to - the good stuff - since November: 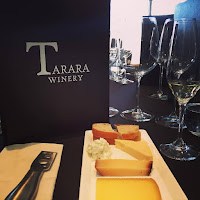 In mid-November, to celebrate my friend Mandy's 40th birthday, a small crew headed to north-central Virginia for a day of wine tasting. Her husband, Oliver, organized it and chauffered, and he did a bang-up job of both.

The best part of the day was the serious tasting at Tarara in Leesburg. Not only were the wines we tasted really nice, the setting is beautiful and the overall experience there is super thorough. The selection, which started with sparkling then made its way through whites and reds, ending with dessert wine, was paired with four diverse cheeses - and a lot of education. I've done a decent amount of wine tasting, but I still learned some things.

Cooper and I alternate families for Thanksgiving; this year, we were at my parents' house, and so were my brother and sister (and Cail and Clark).

Thanksgiving always - always - involves a round of mid-afternoon oysters. Mostly, we stick with Oysters Waskom, our fine-tuned family specialty. As a family, we are pretty locked into tradition. My mom made a new sweet potato recipe this year and there was very nearly a revolt. But as long as we have a couple dozen Waskoms available, we're also open to trying a new approach or two.

This year, my parents worked hard to replicate a dish they'd had in September, when they celebrated my mom's birthday with Erin and Clark at L'Auberge Chez Francois in Great Falls. The oysters - topped with bearnaise and grilled a little (but not too much) impressed them so much.

At home, they needed some tinkering. My mom made the bearnaise the day before Thanksgiving, so it would have time to solidify in the refrigerator, but even the next day, she worried that it was a little too thin. Plus, we grilled the first batch of oysters a little too long - they weren't overcooked, but the bearnaise melted and disappeared.

With adjusted cooking times for the second batch, though, we had it. (And by "we" I mean my dad. All I did was plate and eat.) They were awesome. And pretty: 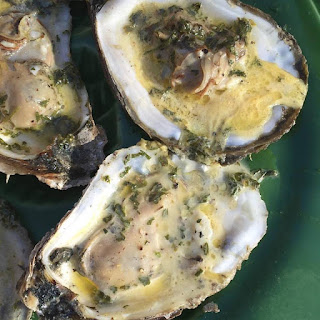 The day after Thanksgiving, as is our tradition, the family, including both baby Virginia Catherine to 97 year old Nan, went to Petit Louis for lunch. It was, as always, excellent. I love the whole menu, but there is nothing like PL's pureed soups. I had a cream of cauliflower that was unreal. Just perfect.

40th Birthday by Clementine at Church and Company 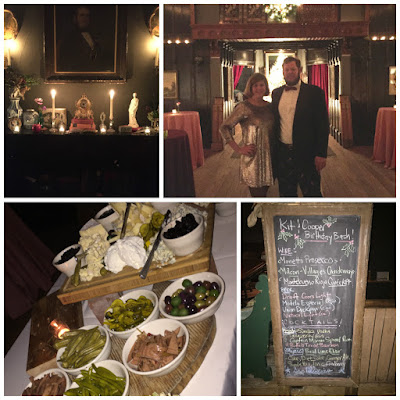 A couple weeks after Thanksgiving, party season got serious Chez Pollard. Cooper turned 40 on December 12th and I followed ten days later, on the 22nd.

After much, much discussion, we decided to throw ourselves a party. (I'm not sure why it required so much discussion. That was obviously what we were always going to do.)

Instead of doing something at home, we rented out Church and Company, an insanely cool event space in an old church in Hampden. Alex, the guy who owns the space (and who rehabbed it himself) might be the nicest person in the world - and he has such a solid eye for design.

Since our party was just before Christmas, the space was all kinds of decked out with garlands and trees and candles. It was just gorgeous.

There was never any question about what we'd do for food - the whole reason we decided not to cook ourselves was that we wanted Clementine to cater. Unsurprisingly, everything from the pickled oysters to the charcuterie (heyyyy chicken liver pate) to the basil lime elixir was incredible. Plus, Alicia made us mint chocolate chip cupcakes and our friends got us a cake from Graul's - both of which were awesome.

It wasn't just Clementine's food that was great - it was the people, too. Especially Cristin, who realized we were wrong when we told her we didn't want to hire a bartender. She gracefully let us make that choice...then stepped in and tended bar at the last minute (with Alex's help). She was right, I was wrong, and she didn't even say, "I told you so."

Overall, the night was kind of ridiculous. On one hand, I felt silly throwing such an intense party just for our birthdays. Between the space, the catering and the guest list, which covered family and friends from all parts of our lives, it was like a small(ish) wedding. On the other...it was so great I didn't really care. It was a blast.

But here's where things get really ridiculous. The Friday night party in Baltimore was just round one.

The party continued on Saturday, when I made my annual birthday trip to McGarvey's. I've been celebrating there since I turned 21...and party in Baltimore or no, I was not about to break that tradition. Instead, I upped the ante.

Most years, we just have lunch or brunch or drinks in the bar, wherever we happen to fall. This year, since it was a big one, I reserved the upstairs space from 4 to 6 p.m. 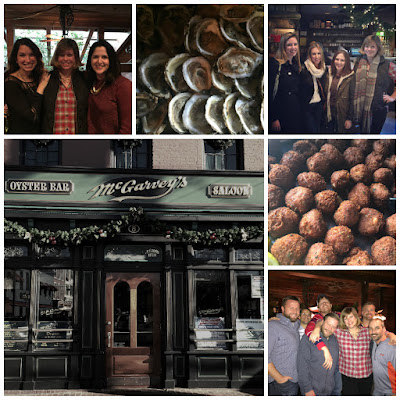 I'd never been up there before - it's only open for private parties - so even just walking up the steps was a total thrill. It's not a terribly big space - it holds about 30 people, standing - but it is comfortable and has a great view of Dock Street and of the back room in the bar itself.

Saturday's crowd was more Annapolis-oriented - my high school friends and family (including the ones who live in Virginia), plus Mike and Alicia from Baltimore and Stacy, who came down from New York just for the parties. Unfortunately, we were missing not only Bill and Kyle and Mary but also Cooper, who got sick at the end of the week. He powered through Friday night like a champ...but just couldn't do it on Saturday. Sad, but understandable.

Ultimately, that meant more oysters, crab balls and crab cakes for us. That's what we ate at McGarvey's (along with many, many Aviators, their house beer). Those are McG's strengths - and they did them well.

We were all also super impressed with the service. We had one young waitress, who hustled up and down the steps and kept drinks in everybody's hands for two straight hours. She was such a pro.


Once the upstairs party ended, we migrated downstairs for a couple more drinks and to figure out a plan of action. Our goal was to drink our way up Main Street, following the path of a long ago bar crawl that Bert and Rob and I did, and to still be standing strong, ending at Harry Browne's, at midnight, when Bert turned 41. 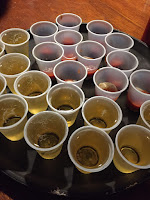 Spoiler alert: we made it.

But we knew, if that was going to happen, we needed sustenance. Bert scoped out the options for a group our size and we ended up upstairs at Middleton's, where everyone scarfed down burgers, crab cakes...and oyster shooters.

Next, we classed it up with Natty Bohs and a Bud Light tower at Acme, which was so, so, so crowded, even at 8:30. It was kind of weird, being there without anyone using a fake ID. 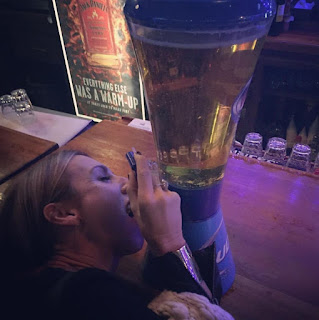 Note: that is Alicia. 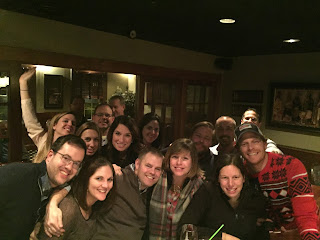 After Acme, we made two more quick stops - Treaty of Paris, which was a bit of a snoozer, and Galway Bay, which was packed and super festive - before finally stumbling into Harry Browne's.

As a general rule, when I go out in Annapolis with my high school friends, that's where we end the night. It's such a nice bar, so it's always kind of funny to roll in there after watching people spill beer all over each other at Acme or wherever.

As soon as we walk in, we always start upgrading our drinks - and making a mess. I switched to wine and Alison ordered a martini, which she promptly spilled everywhere. Rasim ordered a pile of food and I ate an entire plate of calamari by myself. Hot.

Then, we went home (or back to the O'Callaghan Hotel, in my case) and slept it off. What a night. 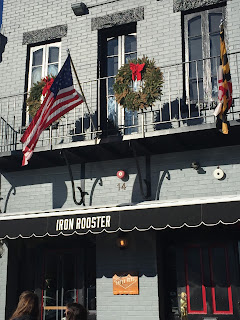 What's funny (maybe?) is that wasn't even the end of it. The next morning, Mike, Alicia, Stacy and I had an awesome breakfast at Iron Rooster in Annapolis. Their homemade pop tarts really are no joke.

And then, on my actual birthday - which was a Tuesday - Dixon and Cooper and I had dinner at Grano Emporio in Hampden.

I had veal marsala and it was lovely. Cooper and I also split a carafe of Montepulciano and I remembered that I so love restaurants that still sell wine in carafes. They remind me of when I was a kid, going out to dinner with my parents.

And then, finally, the birthday celebrating came to an end. 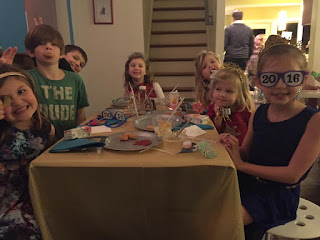 But just a few days after my birthday, we were back on the party train with Christmas Eve dinner at our house (first time ever! Meat...obviously.) followed by Christmas brunch with Cooper's family and dinner at his parent's house (more meat...obviously).

On New Year's Eve, we had dinner at our house with Mike, Alicia, Kyle, Mary, George, Audrey and all the kids. Piper, George and Audrey's second oldest, came over early to help me set the kids' table, which made the whole day even better for me. She is only in second grade, but was so thoughtful about all of it.

We had Oysters Waskom, crab cakes from Conrad's, this ridiculously easy and delicious John Besh cauliflower puree thing that I make every year and a bunch of wine.

It was crazy and hectic and fun and such a good way to kick off 2016.

Speaking of 2016, I've already had a bunch of good meals. We loved brunch at Silver Queen and dinner at Smoke (more on those later) and we have a bunch of good dinners and parties scheduled for the next few weeks.