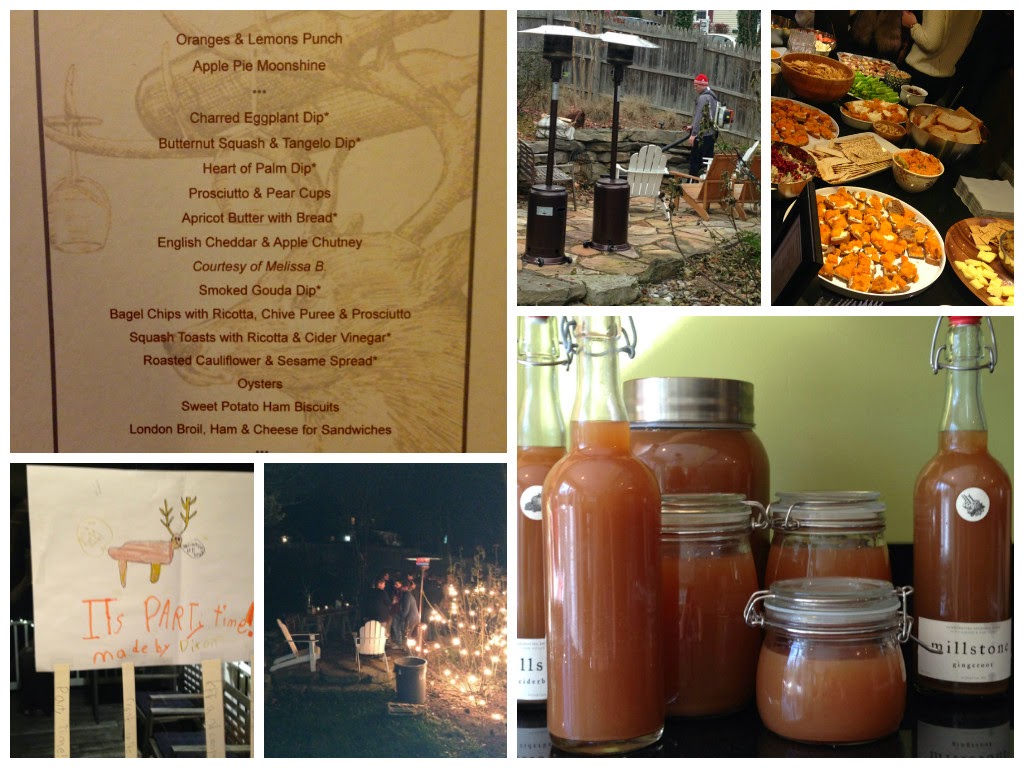 It's been nearly two weeks, so I've mostly recovered. This year, the weekend before Thanksgiving, we hosted our 12th annual Mock Thanksgiving party. It's come a long way from its humble beginnings, in the kitchen at Cooper's old house, back when we first started dating and Cooper's roommates still lived there (or in Maryland, for that matter).

The first year was filled with laughter...and a burned turkey and also a lot of Beaujolais Nouveau. So much Beaujolais.

This year, the laughter carried on but - for the first time ever - there was no turkey. The party has evolved quite a bit, from a traditional Thanksgiving dinner with just a few people, through several experimental years as the crew got larger and the food got better, to now, when it's less a dinner and more a cocktail party with some food.

These days, the planning starts at least six weeks ahead of time - and I definitely think a lot more about aesthetics and theme than I did in the early years.

This year's theme was something along the lines of "Rednecks and Boozehounds." Not in so many words - but from the deer-and-wine-themed invitations to the massive amount of apple pie moonshine we drank, the tone of the party was somewhere several notches below classy.

I thought the best dish of the night was the squash toasts - but hardly any got eaten! Admittedly, they were not pretty. But I'll definitely make them again for dinner. As for losers...well, I wasn't in love with the roasted cauliflower dip. But it was fine.

The big lesson I learned this year was that people will always pick up a onesie hors d'oeuvres before they eat a dip. The stuff you could pick up and eat in one bite went like hotcakes (the proscuitto and pear cups and the bagel chips). The dips...well, let's just say I made a lot of all of them and even the hearts of palm dip, which is a consistent winner, didn't disappear.

Also, the punch was really very good - and so was the moonshine. I'd make either one again in a second.

This party was also a great reminder that sometimes, it really does take a village. Not only was the moonshine originally Alicia's idea, and not only did she come over on Friday to help prep, she and Mike, plus Kyle and Bill, spent a big chunk of Saturday helping me set up. Plus, all of the people who brought things were amazing (that includes my friend Melissa bringing a cheddar and apple chutney app and several people bringing awesome desserts).

Even the kids got in on the action. Dixon, Maddy and Maggie each made a sign that hung on the window during the party. Maddy's and Maggie's were adorable and sweet. Dixon's, on the other hand...his sign included such gems as "Crank Up the Beats!" and "It's Farty Time." Kid's a copywriting genius.

The party, if I do say so myself, was a blast. Funny and fun and a little bit crazy. A perfect way to kick off the holiday season.

The kids' decorations are still up - who would have the heart to take them down so soon? - but the rest of the party remnants have been tucked back in their spots, ready to be pulled out again next year.

And I, of course, already can't wait.
Posted by Kit Pollard at 7:43 AM