Things We Did (and Ate) in May 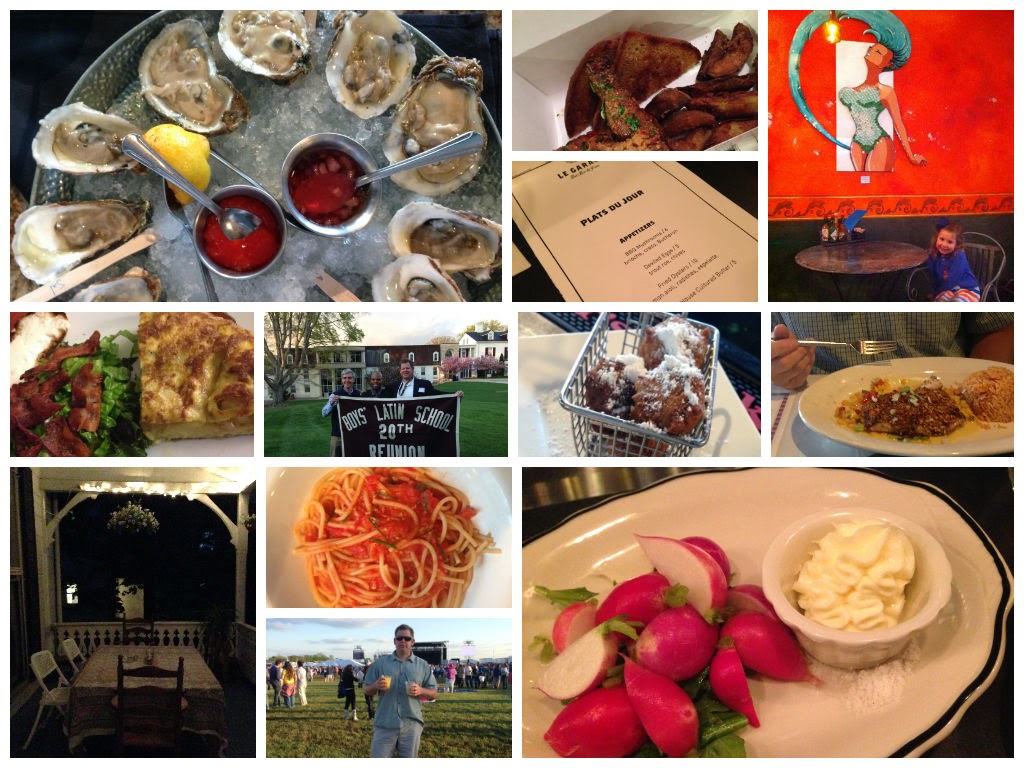 After we returned home from Paris, it was full steam ahead for both of us at work and also at home. We went out to dinner a lot last month - plus I actually cooked a couple nights here at home. Here are some highlights:

Dinners at Home
My first attempt at a Spanish tortilla (using this recipe) was surprisingly good. The whole time I was cooking, I thought I was doing it wrong - it just seemed like too much oil. But then I flipped it out of the pan and...it worked! Well-seasoned, too.

The other home-cooked meal, pasta with anchovy butter (this recipe but I pureed the sauce and added more anchovy) was also a good one. Both were solid weeknight meals.

There was a third, which isn't pictured, and which I didn't like as much. I made chicken and topped with the fried sage salsa verde from this recipe. Cooper liked it a lot, actually, but I thought the salsa verde had a sort of strange texture. The fried sage was interesting...but weird.

Moderately Big Friday Night #1
Just a week after we returned home from our visit with Patrick in Paris, we did a little more high school reunioning for Cooper - this time, in an official capacity.

Because Boys Latin is a smaller school, the reunions are lumped together into one party for all reunion years. We skipped the lacrosse game on Friday but went to the reception at the school Saturday night. It was nice...though Cooper's class turnout was on the nearly nonexistent side. Cooper's other high school friend Patrick - who lives in Maryland, not Paris - got sick the morning of the reunion and couldn't make it. That left just Cooper and two other guys.

I had a good time, anyway - both classmates were nice and I got to meet some teachers and administrators who feature prominently in stories I've heard from Cooper and the Patricks. Plus, I'm always happy to drink a few open bar gin and tonics.

After the reunion, we convinced Bill to meet us at Shoo-Fly, where we had a few drinks and I inhaled a chicken box special. I am a fan of Shoo-fly's fried chicken and their Western fries were - dare I say it? - better than RoFo's. They were so crispy and awesome. Plus, at the reunion, I'd had a couple drinks and nothing to eat. So that box full of fried stuff really hit the spot.

Big Friday Night #1
A week later, with Dixon at a Friday afternoon/evening playdate, Cooper and I took ourselves to Hampden. For months, we'd been excited about Le Garage, Sarah Acconcia's new restaurant in the Hampden space where Dogwood used to be. And it was great.

We had escargots and radishes to start and mussels and chicken-fried rabbit for dinner. Drinks were good, service was great (we sat at the bar) and we were happy all around.

After dinner, with some time to kill, we walked over to The Other Corner for a drink and then - thanks to some careful Facebook observation, we realized that Alicia and Maggie were at The Charmery. (Side note: is there any duo in Baltimore getting more love lately than The Other Corner and The Charmery? I don't think so. They are all over the place.)

We met them there then walked back to Holy Frijoles with them, where Alicia's brother, Patrick, was working, to deliver some Berger cookie ice cream. There, we got to see Patrick's art on the walls - and it was amazing. Pictures couldn't possibly have done it justice. And then...we picked up Dixon and went home.

Big Thursday Night
Mid-week, we hung out over at Tommy and Sarah's house, where we ate dinner on their front porch. It was a beautiful night, which made the whole eating out side thing kind of perfect.

Dinner was good fish tacos and rice - but even more exciting, we started with a steamed artichoke. Cooper hadn't ever had artichoke steamed and dipped in butter - and I'd only had it once, I think, and that was at a restaurant where the leaves had already been pulled from the vegetable. Totally old school, totally fun. Plus, butter is delicious.

Big Friday Night #2
A week or two later, we had another big outing - this time, it was a little more planned. The Counting Crows, nineties band extraordinaire, were playing Black-Eyed Susan Day over Preakness weekend. Cooper and I got excited and though all of our friends bailed (all for good reasons), we got ourselves some tickets and prepared to get muddy in the infield.

Before the concert, because we're grownups, we went to dinner. Since we were heading to Pimlico, I assumed we'd just go to the the Tavern, but instead, Cooper suggested Mari Luna. We hadn't been in a while - and we shouldn't wait so long before going again. I can't believe I forgot how good that place is. Cooper had rockfish, I had paella, and we were both so happy with our meals.

Counting Crows, unfortunately, was more of a disappointment. And by that, I mean that it was a total disappointment. Duritz and company really need to show a little more enthusiasm - and play some freaking August and Everything After - if they want to sell records.

After the concert, we convinced Mike and Alicia to meet us at Ryan's Daughter, to drown our sorrows. We drowned them.

Moderately Big Saturday Night #2
The next day, after Maggie and Mimi's ballet recital (hilarious and adorable), Dixon opted to have a sleepover at Cooper's parents' house, leaving us with an open evening. We were still tired from the night before, so we weren't up for much, but we had been meaning to try Oyster Bay Grille.

We weren't totally disappointed but we didn't love it, either. The oysters were good, though the mignonette was weirdly jellyish, and the crab and corn beignets were very likable. My mahi mahi tacos were good but - weirdly - they had way too much fish and Cooper's crab cake was noticeably underseasoned. Drinks were good and service (at the bar) was fine but the meal overall was kind of expensive. It needed to be better to justify the cost.

Our month didn't stop there - the next weekend was Memorial Day. Usually we stay home that weekend but this year, at the last minute, we headed up to Keuka Lake. Which was awesome, as usual...and will get it's own post. Hopefully before we go up there again for the 4th of July.
Posted by Kit Pollard at 8:46 AM