Sometimes I make such a spectacular disaster of our dinner
that I can't help but take pictures.

That happened earlier this week, when I gamely attempted
the Souffle "Suissesse" featured in the October issue of House Beautiful.

I make souffles all the time. Or, at least, enough to know that I can handle it.
Plus, this one is supposed to fall before you dump it in a new pan, top it with
creamy tomato sauce, reheat and serve it. How hard could it be? 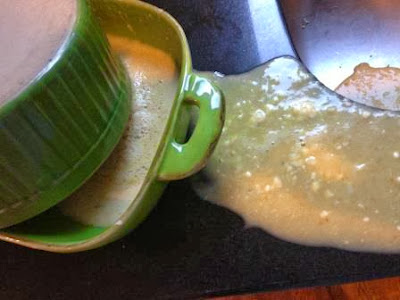 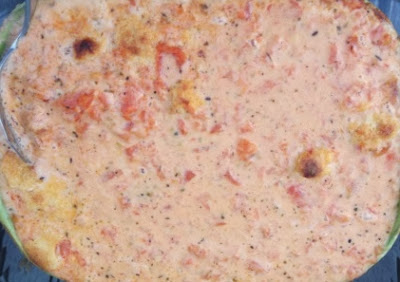 First of all, the recipe took me the better part of three hours.
Not all of that time was active, but enough. On a weeknight.

Secondly, my oven, if anything, usually cooks things quickly.
So when I let the souffle cook for fifteen minutes on top of the
suggested cooking time, I legitimately thought it was done!

As seen in the first photo - the one where I try dumping the half-liquid
souffle into another dish - I was mistaken.

In the end, the dishes I used were too small and the souffle, obviously,
was underdone.

One bright spot: it tasted good. But not three-hours-of-cooking good!
I've made similar dishes that took more like 30 minutes of active prep -
and were just as tasty.

But hey, you can't really put a price on humility in the kitchen, right?

(As a side note, this entire disaster occurred in full view of
Cooper and Dixon. Dixon is the one who came up with "soup-ffle."
I can't resist a six year old's pun, apparently.)
Posted by Kit Pollard at 7:33 AM