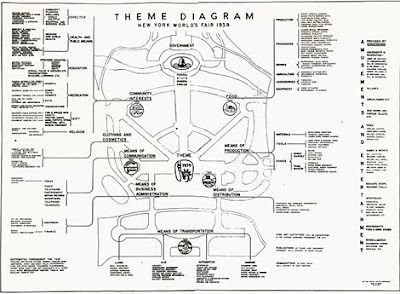 Considering that I was born in 1975, and no where near Queens, I've spent kind of a lot o time thinking about the 1939 World's Fair. I find it fascinating aesthetically (all those mid-century future shapes) and historically (especially since the Fair brought many French chefs, who would go on to shape the New York culinary scene over the following few decades).

In Popular Mechanics, writer Elliot Kanan, who is even younger than I am I think, looks back at the World's Fair. He explores what it said about us at the time and how it's shaken out today, in part through the eyes of his grandmother, who visited the far as a nine year old. Kanan remembers that the fair coincided with Hitler's mess in Europe, and it doesn't glamorize that part of the time, but even with that, it's hard not to romanticize the past.

It's worth a read, definitely - especially if you, like me, can't resist trying to imagine yourself as part of an earlier era. Well, that earlier era anyway.
Posted by Kit Pollard at 7:45 AM

It is good to see that information, really like to share this, this database really helps, Thanks for the information.