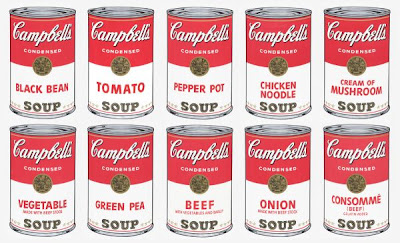 Earlier this week, the market research and product development world lost a star when Donald Goerke, the 83 year old inventor of Spaghetti-O's and Campbell's Chunky Soup, passed away.

Goerke was the marketing research director of Franco-American (part of Campbell's) in the early 1960s when he developed the idea of Spaghetti-O's. He was looking for a pasta product with shapes that would appeal to kids. I think he succeeded. Years later, he also developed the Chunky Soup line. Something of a soupy, researchy Don Draper? Maybe.

This is all close to my heart. For one thing, I really loved Spaghetti-O's until about 3 months ago, when I (sadly) realized I don't like them anymore. For years and years, though, they were my biggest guilty pleasure.

In addition, Chunky Soup was one of my big early clients when I worked at Context. I've been to Campbell's HQ, in lovely Camden, New Jersey and have seen the Warhol in the lobby. I have learned a lot about the people who buy and eat Chunky. For an old, staid company, Campbell's was willing to take some research risks (sounds like an oxymoron, I know, but trust me).

This week is definitely a little sadder for the market research community - and for anyone in the food world who still appreciates the innovation that those products once represented.

Homemade Spaghetti-O's are perfect for a winter night. I made these a couple years ago, and your post just reminded me how good they were.