Artsy Wednesday: the Many Talents of Patrick Kelly 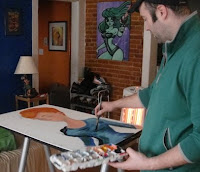 Let's talk, for a minute, about the Kelly family. I know them through Alicia, who's a Kelly by birth (and a Barger by choice). Alicia's mom is stylish and funny and her dad is, well, he's a lot of things, including a champion of air guitar. But this post, really, is about Alicia's brother, Patrick.

In his little studio in Mount Vernon, which is perpetually hidden by scaffolding and a not-so-fine layer of dust, Patrick paints crazy and fabulous comic-inspired women. He also paints awesome animals and other characters, several of which watch over Dixon while he sleeps. We've know for a while that Patrick's a talented artist. We've also known that he's got more patience than most, which is a good thing, since his day job is working with the kids at the Maryland School for the Blind (Alicia works there, too).

What I didn't know, though, until recently, is that not only is Patrick talented with a paintbrush, he's got skills with a microphone, as well.

This past weekend, though, we got a glimpse of the other Patrick, the one who's not afraid to sing a little Elvis, with his band, Sound Storm. The venue, the Parkville VFW, might not exactly be Wembly Stadium, but he and the band certainly did command the attention of the crowd. The set list was mostly oldies and Motown, and mid-set, the band called their moms up to the stage for a Mother's Day tribute (including corsages). It was sweet in the very best way, and so much fun. Especially, of course, since in addition to his other talents, Mr. Kelly is quite a dancer.

Plus, as the tickets clearly stated, the event was BYO Snacks. And everybody loves snacks, right?