Beer Me a Beer

It's a sudsy world these days.

Between the loosening of brewing laws (locally) and a surge in craft brewing, the booze world in 2015 appears to belong to the beermakers. In 2014, craft breweries generated $19.6 billion of $101.5 billion U.S. beer sales - a 22% increase over the year. That is...a lot of craft beer.

It's no surprise, then, that the beer industry is a strong player in the internet's coveted "people who make cool maps and write listicles using consumer data" market. Just today, I came across three good examples of the genre.

My favorite is the map below. The Priceonomics website, using data pulled from over 6,000 menus from restaurants located throughout the U.S., determined the most commonly listed beers in each state: 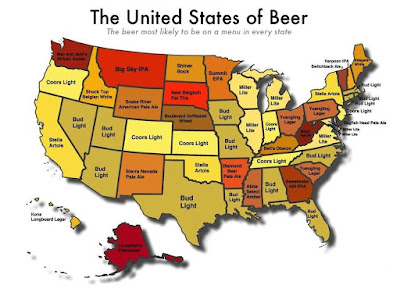 The map above, which summarizes those findings, suggests that America is Bud Light Land. Except for Maryland and Virginia...which are Miller Lite Land. Interesting. Also interesting: that South Carolina is a little pocket of Yuengling Country. And that Okies love Stella. Who knew?

Using Beer Advocate data, the website Cool Material created a list of the most highly rated beer from each state. In Maryland, it's Duckpin from Union Brewing - a brew that is, these days, almost as common on restaurant menus as Natty Boh.

The Chive mined data from Thrillist and the Beer Hunt app to put together a list of the most popular craft beers from each state. I have to kinda question their methodology, though...because Natty Boh was listed as Maryland's beer. I'm pretty sure that no matter what definition of "craft" you're using, something brewed by a major international brewer shouldn't fall in that category. (Unless, I guess, it has more to do with limited distribution area than brewer. But that still seems wrong.)

Unsurprisingly, Delaware is allll about the Dogfish Head - on all of these lists. The actual beer might vary but there's no doubt that DE is Dogfish country.
Posted by Kit Pollard at 6:00 AM