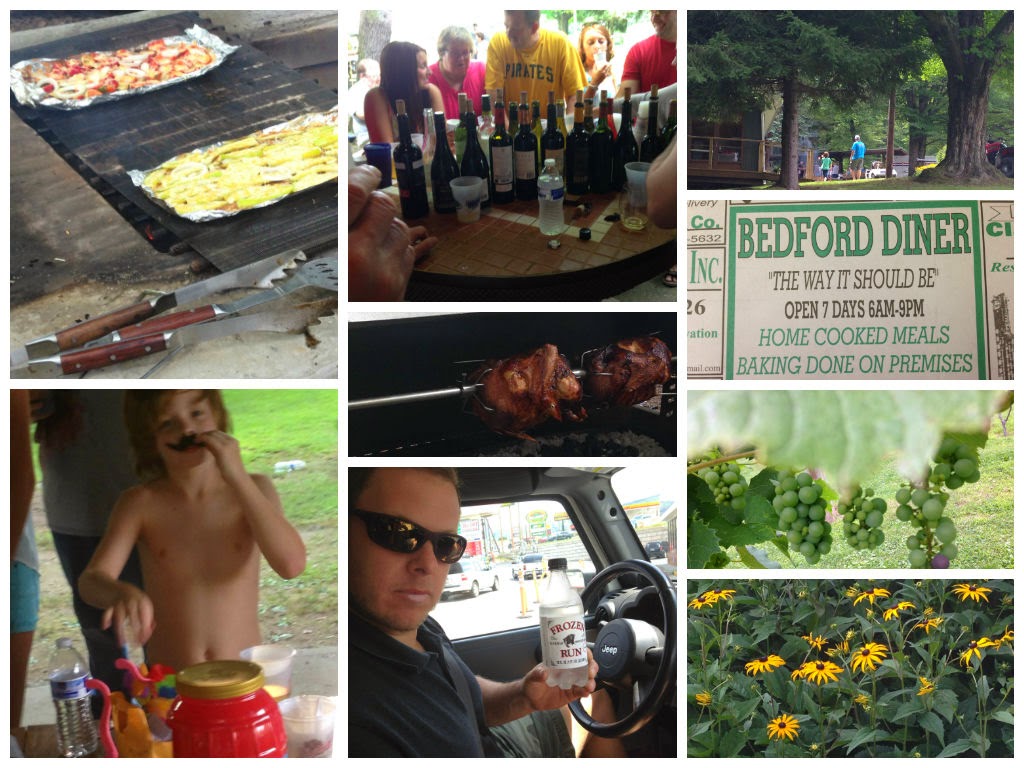 Earlier this month, we went to the 35th annual Ertter Family Reunion, otherwise known around these parts as "Mary's family reunion." Mary grew up in a small town about an hour outside Pittsburgh; her parents still live there, as do a whole bunch of other relatives.

The reunion, which we've been lucky enough to go to three times, is held on a big piece of Ertter land just across the street from Mary's parents' house. There's a pool and an old tennis court (which becomes beer pong central at night) and a pavilion next to a giant fire pit. There are grapevines and blueberry bushes and apple trees...and overall, it's just awesome.

This year, right after we arrived, I jumped right into a wine tasting lead by one of Mary's cousins (I think - there are a lot of people and sometimes it's hard to tell exactly how they're all related). The guy who leads the tasting sells wine in Ohio - and he totally knows his stuff. This year, it included about 20 wines, half white, half red, and an interesting selection of similar varietals from different parts of the world. We'd taste a red syrah/grenache from Spain, for example, then follow it with a similar blend from California. It was great.

Other highlights included cheese-stuffed, grilled peppers topped with cheese (and so much butter), the zillions of salads, apps and desserts the family makes and, as ever, a Genessee beer truck.

We make a nice little road trip out of it, too. On the way to PA, we stopped at Family Meal to have breakfast with Sarah G. (My goat cheese and caramelized onion omelet was lovely but the potatoes - so crazy crispy - are the thing not to miss.)

During another stop, Cooper picked up the weirdest local birch beer - it tasted like wintergreen Lifesavers - and I had the probably not that exciting epiphany that Martin's Potato Rolls are a Pennsylvania product. (I just think of them as global. Who doesn't love a potato roll?)

On the way home, we stopped at Bedford Diner, where last year we had a surprisingly amazing breakfast. Unfortunately, this year's experience was not as good - thanks in part to a waitress who probably shouldn't be working in a diner (she was so scattered). But, just like last year, the scrapple I ordered was magical. Seriously, some of the best ever, and I consider myself a connoisseur.

As always, it was a weekend filled with so many laughs, so much fun, and so much love. We're so lucky to not only have great friends - our friends also have great families.
Posted by Kit Pollard at 1:08 PM