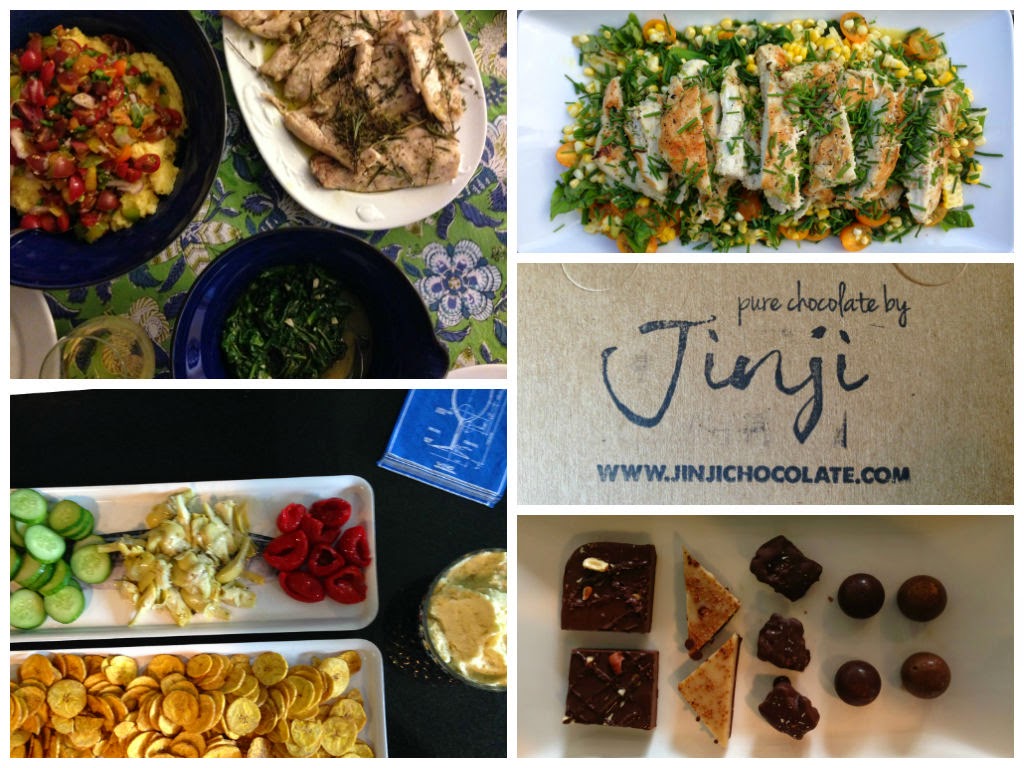 Gluten-free eating is kind of a big deal these days, huh? According to the National Foundation for Celiac Awareness, about 1% of the population has celiac disease - a condition for which a completely gluten-free diet is the only treatment. But on top of that, a 2012 Mayo Clinic survey found that about 6% of the population has some sort of gluten sensitivity. And on top of that, there are a whole lot of other people who like trendy diets - and being gluten-free is definitely on trend.

Fortunately, I do not fall in that 1% or the 6% or the trendy diet category, either. I love gluten and will continue to inhale floury food products at every possible opportunity. So it is with some interest that I report this: I made two gluten-free meals this week. And I liked them.

The first (pictured on the top right) was grilled chicken over a salad of tomatoes, herbs, grilled corn and scallions, all doused in jalapeno-lime dressing. The recipe came from the August issue of Food and Wine - and it was good. It made good use of what we're growing and all of the summery flavors were fantastic. I liked it even more as lunch the next day, served taco-style with tortillas (not gluten-free).

That meal was sort of a gluten-free accident - I just wanted to make the dinner and wasn't thinking at all about gluten. But Wednesday night, when we had Tommy and his lady friend Sarah over for dinner, I was more careful. Sarah is both gluten-free and dairy-free, which means I got a quick grocery store lesson in everything that has some trace of milk or wheat. Which, for at least one defeated moment when I discovered that gluten-free bread crumbs include dry milk, felt like everything.

But in reality, it's not everything and we ended up having a really good dinner. To start, my trusty go-to heart of palm dip with plantain chips, cucumbers, artichokes and peppers. For the entree, rockfish (from Conrad's), rubbed with olive oil and marinated in white wine and herbs from the garden, plus heirloom tomato relish over corn grits (made with Earth Balance vegan "butter"), and sauteed spinach and garlic.

And for dessert, a selection of chocolate from Pure Chocolate by Jinji, the local vegan chocolatier that just opened up a stand in Belvedere Square. The chocolate is crazy rich - a little goes a long way - but it also looks so pretty that I wanted to buy everything.

It was good! All of it! And as far as I know, Sarah is still standing, which means I didn't accidentally slip any gluten or dairy into the mix.

Reading labels so carefully adds an extra layer of complexity to cooking. I don't envy those with gluten sensitivities - not at all. But at least these days, it's possible to eat a good meal without gluten.

Especially, of course, in August.
Posted by Kit Pollard at 7:58 AM