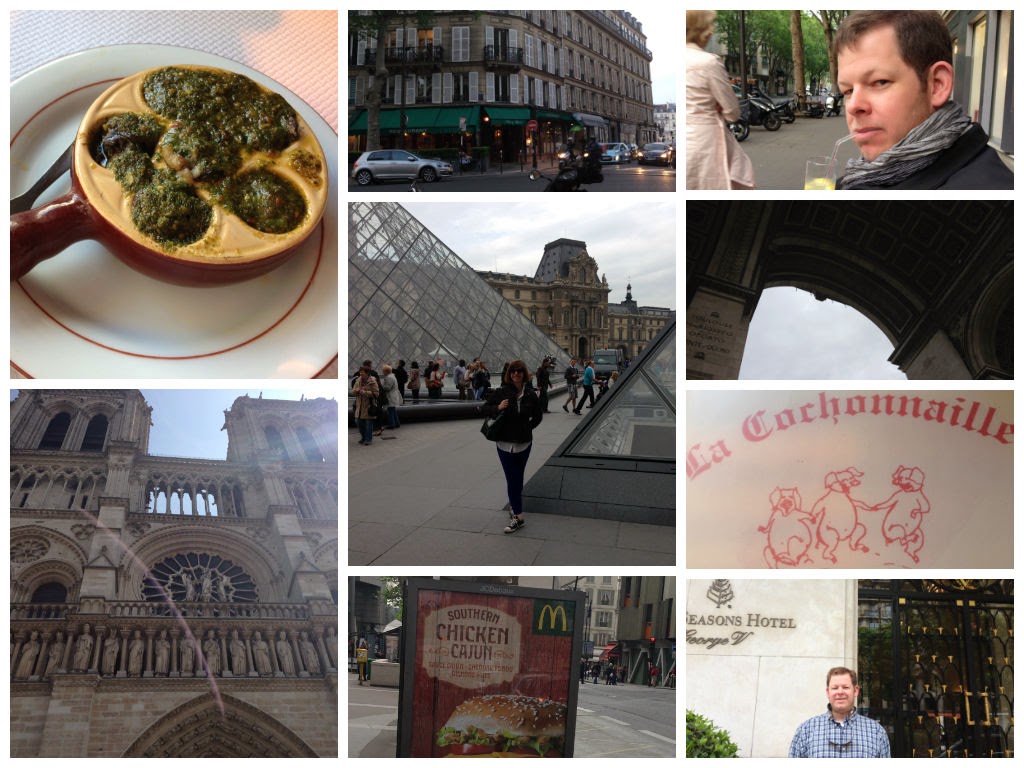 (Clockwise from top right corner: Escargots at La Cochonnaille, Chez Rene, Euro Cooper, the Arc de Triomphe, piggy menu, CRP living the dream at the Georges V, a McDonald's ad that proves that the South actually has won, Notre Dame, and in the center, me at the Louvre)

Our second day in Paris was filled with gorgeous weather. We took full advantage and spent the morning absolutely crushing the sights of the Right Bank.

We started at the Arc de Triomphe then walked down the Champs Elysees to Avenue Georges V. One of the very few things that Cooper really wanted to do in Paris was walk past the Georges V - specifically because French Kiss is one of his favorite movies. "This is the Georges V, not some backpacker's hovel."

From there, we took the metro over to the Louvre, where, as is my custom, we walked around and took some photos near the glass pyramids but we didn't even consider going in. The lines...they're scary.

We then walked up the Rue de Rivoli, which is basically like walking on a shopping street, or through a mall, in any city. On my first trip to Europe, 13 years ago, I was so psyched to find multiple H&Ms in Stockholm. We didn't have any yet in the Baltimore area. Today, with such easy access to every single chain store - either because we have one in the mall or because of the internet - streets like that lose some of their charm. Still, Parisian architecture is pretty.

After wandering around near Les Halles and even up to the Bastille area, we metroed back down to the Louvre and walked over Pont Neuf to Ile de la Cite. Then we walked up the island to Notre Dame - which was really a nice walk, especially near the big flower market.

Like the Arc and the Louvre, Notre Dame was a crazy busy mess. I've been in before and found it mesmerizing but the lines were just too long for us to wait. Still, even from the outside, it's an incredible building.

We then walked back to the Left Bank and wandered a little before hitting a cafe called La Cochonaille for lunch. It was probably our worst food decision of the trip - and we'd chosen it simply because of the piggies on the sign (which actually seemed like a totally reasonable decision).

It wasn't bad exactly - my mushroom omelet was very nice and Cooper's escargots and cassoulet (so much pork, it was hilarious) were fine. But as we left, we watched a truck unload dozens of industrial-sized cans of duck confit into the kitchen. I'm sure it was very high quality canned duck confit? No, actually, I'm not sure of that at all.

After a quick stop at Monoprix for water, gifts and a scarf for Cooper (so he could fit in with the Parisians), we settled in for a little nap before getting ready for dinner - we were meeting our friends Patrick and Amanda at a restaurant on the eastern end of the Left Bank.

We had some time to kill before dinner, so we walked a bit more and stopped for a drink in a cafe across the street from the restaurant. There, we organized the first of several photo shoots with Le Scarf - and we realized that posting pictures on Facebook while we were out drinking and all our friends were at work in the US? It's fun.

Dinner was at Chez Rene, a very charming traditional Parisian bistro. We started with gigantic - and I mean gigantic - slabs of foie gras, served with toast points. They were, seriously, unreal. Also, delicious.

For dinner, Cooper had entrecote (steak) and I opted for veal blanquettes. I love veal - any cut, any time - and I am also in love with rich white sauces. So what's not to like? The preparation was really lovely, and I couldn't even come close to finishing. (I did, however, save room for chocolate mousse.)

Which made me wonder: you hear so much about huge American portion sizes. I admit, lunches in Paris cafes weren't crazy huge (but they weren't small) - but every dinner we had was enormous. We're talking Cheesecake Factory portion sizes.

I realize that the fat American problem has other causes, too, which include processed foods, lack of walking and - let's be honest here - lack of smoking. But after this trip, I can't possibly think of portion size as solely an American problem.

But that's a discussion for another time. After dinner, it was late and Patrick and Amanda still had to work the next day. So we said our goodbyes and went home to rest up for our Parisian Friday. Which I will write about later.
Posted by Kit Pollard at 9:29 AM