Last Night's Dinner: Tortilla Soup from the May 2013 Food and Wine 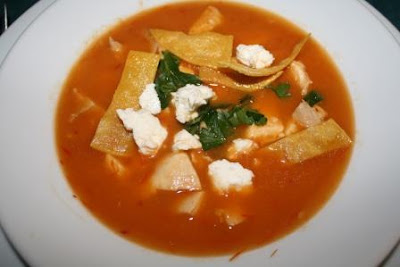 It feels a little flip to write about food after what happened in Boston yesterday. But nothing I could write about Boston would improve on what Mr. Rogers and Patton Oswalt had to say. So food it is.

Last night I made this tortilla soup, which has a tomato base, blended with a few chipotle chiles and finished with butter. Cubed rotisserie chicken provides extra heft and homemade fried tortillas, cilantro and queso fresco are garnishes. On paper, it sounds excellent.

But in practice? It was OK.

First, I accidentally bought parsley instead of cilantro. (I was distracted.) I also had to make two trips to the grocery store - one after 6 p.m. - because I didn't buy enough chicken stock the first time around.

Ultimately, the chicken-to-soup ratio was off - it needed about 1/2 as much broth as the recipe made. And the broth, with its tomato base, just wasn't as great as other tortilla soups I've had.

So I probably won't make it again. But if tomato is your thing...go for it. Just sniff the cilantro before you buy. Just to make sure.