It is no secret that I love oysters.
They are a part of pretty much every Waskom family celebration
(during the "R" months) and they were just about the only thing
I truly missed while I was pregnant with Dixon.
It's strange, then, that it took me so long to go to Thames Street Oyster House.
(Especially considering that our friend and neighbor, Teresa, works there.)
Last week, after Kathy and Neal's book launch party at Chazz,
Cooper and I found ourselves with a babysitter and a little time to kill,
so we headed over to Fells.
And we were so glad we did! In addition to a few amazing appetizers -
grilled octopus over peperonata and chapa
(bread topped with pork, blue cheese and onions) -
we had a dozen fantastic oysters: 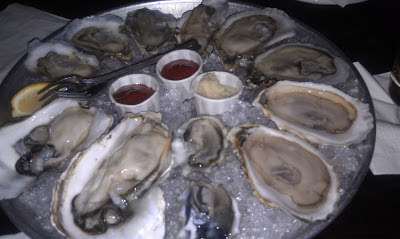 I have eaten a lot of oysters - but this dozen was one of my favorites.
For one thing, they were super cold.
But also, this was the first bona fide oyster tasting I'd done.
When we sat down, the hostess gave us this little sheet: 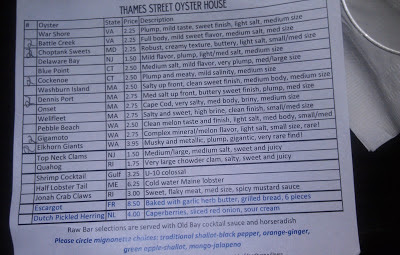 We marked our selections, sushi-style.
Then when we ate, we found ourselves comparing the flavors,
like we were tasting wine.
The descriptions were dead-on, too. The Elkhorn Giants? Not only
were they enormous, they were also crazy metallic,
just like the paper said they'd be. (As it turns out, neither of us
is a huge fan of metallic oysters.)
And the Gigamotos, the little round guys to the right of the Giants?
They really did taste like melon! And that was a good thing.
They were among my favorites.
But you know what the biggest surprise was?
My favorite oysters...were the Choptank Sweets.
I guess I really am a Maryland girl at heart.

Who DOESN'T love an oyster tower?

I'll tell you who does: four American girls who aren't afraid to each eat two entrees.

Was wondering why you didn't eat at Chazz - you had an oysterfest.

I had Choptank Sweets for the first time last night, and they were delicious! I'm just getting into raw oysters, and I'm betting I don't like metallic ones, either.

The metallic ones were challenging, Kathy. They were also enormous - I prefer more my oysters in more manageable sizes.