If you haven't heard about it, this Washington Post article provides a good summary. The basic gist is this: bourbon (and other whisky) requires several years of aging before bottling and distribution. As a result, producers have to predict how much they're going to need a few years before anything actually makes it to the store.

Over the past few years, bourbon has experienced a ton of growth and as a result, there's not enough Maker's to meet demand (it's a very popular brand).

Under normal circumstances, a company would simply raise prices to balance the supply and demand curves. Simple Econ 101. But in Maker's case, it's a "power brand" in its parent company's portfolio. That company - Beam, Inc. (as in Jim Beam) - needs Maker's wide distribution - at its current upper-mid-range position - to help pave the way for smaller brands. So simply raising the price isn't good enough.

Instead, the company announced a plan to slightly change the formula, making new Maker's 42% alcohol vs. the current 45% formula. People freaked out; the company backed off. 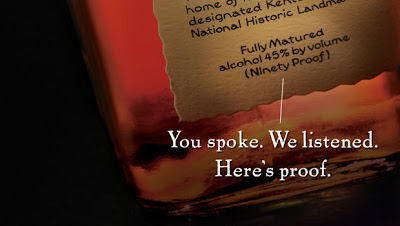 From a marketing perspective, it's an interesting study. And when it comes down to it, it is a marketing story, more than anything else. The difference between the two formulations would be noticeable, but not to most of the people buying and drinking Maker's Mark. But perception is everything.

One of the more interesting things I've read about this whole debacle was a comment - I believe it was on the WaPo story - suggesting that a better strategy, from the outset, would've been to break the Maker's brand into two tiers. The first would be top shelf "reserve" (or something like that), preserving the original formula at a higher price point; the other a lower alcohol mass market product that keeps the brand's distribution intact.

This is not new ground in the liquor industry - just look at all those Johnny Walkers.

But it seems so logical to me. Granted, I don't know all the ins and outs of the Maker's brand or of Beam's marketing or distribution strategies. They must have considered the tiered route.

I just wonder why they didn't choose that path.
Posted by Kit Pollard at 9:47 PM