Last week was an exciting one at the Barger house, thanks to a visit from Alicia's parents, the ever-popular Bill and Pat Kelly.

Mr. Kelly - or "Big G" as he's called now that the baby Barger has arrived and he's officially a grandfather - continued to win Dixon's heart with a gift of a bubble sword: 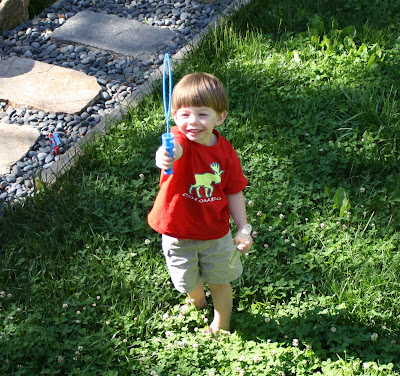 He continued to win Cooper's heart and my heart by ordering Royal Farms fried chicken and making us "crack potatoes," which are simply cubed potatoes cooked with bacon on Big G's portable griddle, but they taste much, much more complicated than that. They're called "crack potatoes" because they're that addictive.

(And if you're thinking of calling me out for loving RFC, well, think again. It's delicious.)

During the week, Big G stayed with Mike and Alicia and baby Maggie while Mrs. Kelly jetted off to Vegas for a conference. She had a great time and brought me a souvenir from one dinner out: 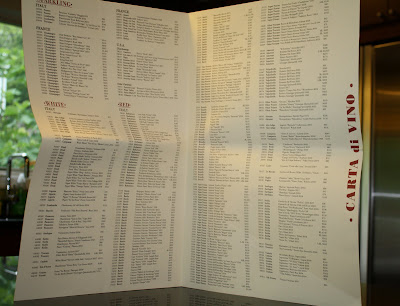 That's the menu from from CarneVino, the Batali-Bastianich Italian steakhouse in the Palazzo hotel, opened to show off the wine list. Well, not even the whole list. The back of the menu is covered, too. It's Italy-heavy, understandably, and impressively diverse, cost-wise. I imagine that Vegas wine lists are usually super pricey, and while most of these bottles are in the three digits and there is one 2006 white from Domaine Romanee Conti that runs $4,200, a handful of the bottles are $60 and under. Not that that's cheap, but Vegas is spendy.

The menu itself is much briefer, but looks pretty fantastic. My order would be: insalata caprese (in season only, but I can't NOT order something involving burrata), ricotta and egg raviolo with brown butter (because...brown butter) and the 20 ounce, bone-in Marshal Farms veal chop. Altogether, without wine, that would cost a mere $112. Which is what happens when you order a $75 veal chop.

Kind of a fantastic souvenir, right?

Have griddle will travel