Boys in Ties (and a Cinghiale Review Preview) 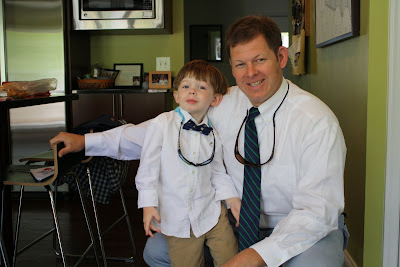 The bow tie, which has little bulldogs on it, is from Crewcuts and the Croakies are from, well, the Croakies website. As it turns out, it's not that easy to find kid-sized Croakies. Maybe most three year olds don't beg for them?

After the wedding on Saturday, we had drinks and dinner at Cinghiale with Alison and Sean (Alison is my high school friend and former roommate and Sean a) was in Cooper's fraternity and b) is Mike's friend from high school). It was over the top and fantastic, from my basil and limoncello cocktail to Sean's ridiculously tender veal chop, and I'll write about it in more detail tomorrow because it deserves its own post.