Last weekend, we threw a couple's shower for Kyle and Mary, who are getting married Memorial Day weekend. It rained - a lot - for what felt like three weeks leading up to the shower, only to magically dry out just as guests started to arrive.

We'd prepared, though, and put all of the drinks on our front porch, which looked pretty and inviting - and I'll post pictures as soon as I upload the ones I took.

In the meantime, here are some of Mary and Alicia's pics: 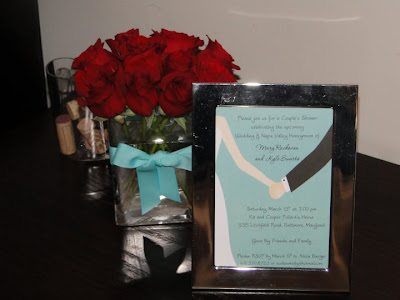 The wedding colors are red and Tiffany blue, so we made simple arrangements of roses in rectangular glass vases tied with blue grosgrain ribbon. The invitations, from Simply Noted, were very simple. 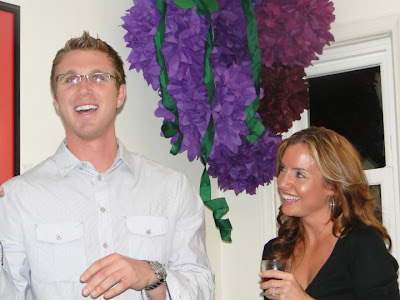 Kyle and Mary, making a speech after opening gifts. This is right before Kyle started crying. 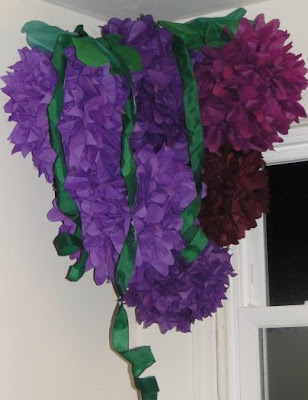 They're going to Napa on their honeymoon, so the shower had a little bit of a wine theme. We ordered these poms from Etsy and spent waaaay too long figuring out how to hang them perfectly so they looked like a bunch of grapes. Or, I should say, Mike and Alicia spent way too long. Because obviously Cooper and I don't have the patience for that. 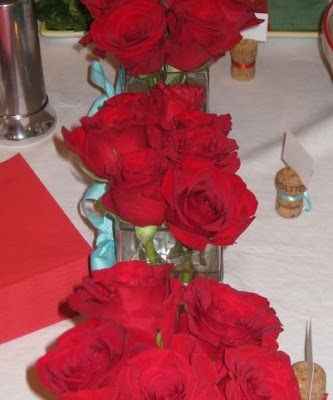 The flowers were placed all over the house, including on the main table with the food. Also, the food labels were stuck in champagne corks tied with red and blue ribbons. As it turns out, we had an embarrassingly large collection of champagne corks. 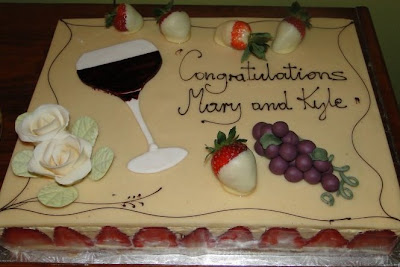 Patisserie Poupon outdid themselves on the frasier cake - the grapes alone were a serious work of art. 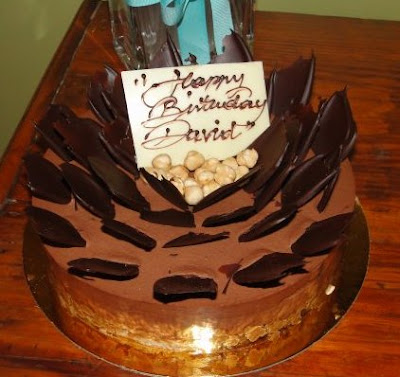 Saturday was also Kyle's dad's birthday, so we got a small hazelnut cake for him - which was both delicious and beautiful.

Overall, it was a super fun night with lots of great food and sangria. Mary's uncle owns a restaurant in her hometown just outside of Pittsburgh, so he sent a bunch of food down, plus Alicia and I made some of our old standards.

We're just now finishing up with the leftovers. At some point, I'm going to figure out how much food to make for a party. Maybe.
Posted by Kit Pollard at 8:34 AM