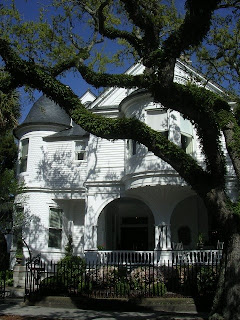 I've never been to Charleston, South Carolina, but I've always wanted to go. In pictures and movies and books it looks beautiful and gracious and appropriately slow. Plus, the movie Shag was more than a small force in my adolescence (yes, I know it was set in Myrtle Beach, but still...SC).

So I've always sort of wanted to visit, but the need has never been pressing.

A couple of months ago, though, Mike took a business trip to Charleston and spent the day sending me texts about all the amazing food he was eating. I was jealous.

Then, a few weeks ago, Becky from Hatch took a Charleston trip of her own and when she came back she posted some of her photos on Houzz (including that one on the right). They're everything I'd imagine from what I've read of the city.

But now I'm worried that I waited too long and missed the window. Charleston has obviously been invaded by the great washed...the urban masses flocking from NYC and San Francisco and LA. Can the city's character withstand the flood? I don't know - since I've never been there. I do still want to visit, but sentences like these, from a recent Elle Decor article on the city, send chills down my spine:

“Seven years ago my husband, Jonathan, and I told our friends that we were moving to Charleston, and the reply was ‘Why the hell are you doing that?’” says Lulan’s owner, San Francisco transplant and ex-Hanoi resident Eve Blossom. “Now when I tell people in San Francisco where we live, they say, ‘My gosh, I was just there’ or ‘My friends recently moved there from L.A.’ West Coasters have taken notice.”

You need to go. Wonderful town, great weather in the spring, exceptional food. We found the cutest rental - a private villa seated in a private courtyard, complete with a lap pool, koi pond and wireless. (Even in historical Charleston we have needs.)

Gourmet has an article about Charleston this month, too. We went two years ago for a wedding-- gorgeous city, great food. Reminded me of NOLA, which is always a plus in my book.

Well, Cail, you ARE a flower of the South.

NOLA is actually on the same list Charleston's on - cities I think I'd love. At least I know I'll get there sometime soon.

So I have been going to Charleston since I was about 10 years old. As you know my dad went to the Citadel and we would go every year for an Alumni event. Also the mansion that was used for the outside shots of Tara (Plantation from Gone With the Wind, my fav. movie) is nearby so that was always so exciting. Mike is going back in a couple of weeks and I am thinking of going. Maybe you and Cooper should come and we can make a weekend out of it. AKB

Hmm. I wonder if we could swing that. Depends on when, really - do you have the dates yet?