The Best Rioja in All the Land 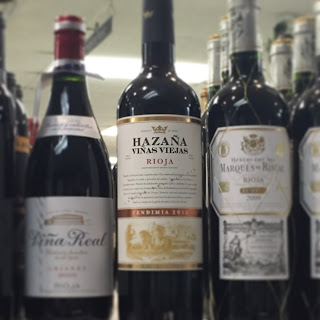 Hazana Vinas Viejas 2013 Rioja. Get some - sooner rather than later.

While the best in all the land might be an exaggeration, this Rioja is pretty damn good. And here's what's even better: it's only $11.99 at Wells.

For Valentine's Day this year, Mike and Alicia threw a wine tasting party. Every couple brought a bottle; we tasted about a dozen bottles of Rioja, all under $25. The tasting was blind and at the end everyone got one vote for the best wine.

When all the tasting was done, and we'd dispensed with the very classy wine conversation (just like Sideways, but with much, much fouler language), Mike and I tallied the votes, discovering that nearly all the votes went to two bottles of wine.

Then we realized that the two winners were actually the same wine - the Hazana Vinas Viejas. It's not a complicated wine, but it is interesting, with lots of flavor and a very smooth, food-friendly texture. Total crowd pleaser.

I was thrilled, then, when I stopped by Wells last week and found it on the shelf for $11.99. Next thing I knew, I was telling Mr. Lee, who has worked at Wells forever, all about the party, and he was giving me a quick lesson on the geography of Rioja and how grape sourcing effects wine flavor.

Mr. Lee is (very) familiar with the current Pollard Rioja habit - we buy a boatload of the super-cheap-but-good Montebuena - and also with what we like to drink when we're willing to spend more than $10 on a bottle. So when he recommended I grab a bottle of Vina Alberdi and another bottle of Es Lo Que Hay, I did.

And I know they're going to be good. But will we fall instantly in love with them, like we did with the Hazana? It's hard to say. But it certainly won't be a hardship to try.

All of this is a very long way of saying: try this wine. And if you're in the vicinity of Wells and need advice or just want a little knowledge about how a wine is made or why it tastes the way it does, ask Mr. Lee. He will definitely know the answer.
Posted by Kit Pollard at 9:49 AM