One of the things that nobody mentions about restaurant reviewing is that you really need to love doing stuff. That sounds obvious and dumb, I know. But what I mean is this: If you are the kind of person who, at the end of the day, just wants to plop in front of the TV to decompress for two to twelve hours, it is not the job for you. You've gotta like going out - even when it's raining.

Fortunately, I do like it. A lot. Which is why it's not even bothering me that I have gone out five of the past seven nights. And hosted people at our house for the sixth. On the seventh day (which happened to be Monday, so it was actually in the middle), I did, in fact, rest.

In between the reviews and the Halloween festivities, this week included two collaborative dinners - one in Richmond and one in Baltimore. Both were just awesome.

The menus, for your viewing pleasure: 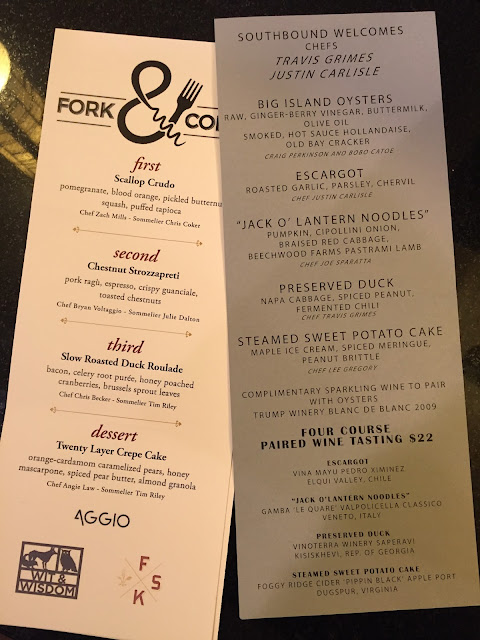 Both dinners were packed full of special stuff - including duck. So much duck. And it was all so good. I'm not sure I can pick an absolute favorite, though I will say that the most exciting dish of all was the first course at Fork and Cork - scallop crudo from Zack Mills. It was paired with a Riesling, which is not usually my bag, but in this case, it was really lovely and right.

But really, both evenings were wonderful. From candy to crudo, we have had a hell of a week of eating. And crazily enough, I'm ready for more tomorrow.
Posted by Kit Pollard at 10:37 PM