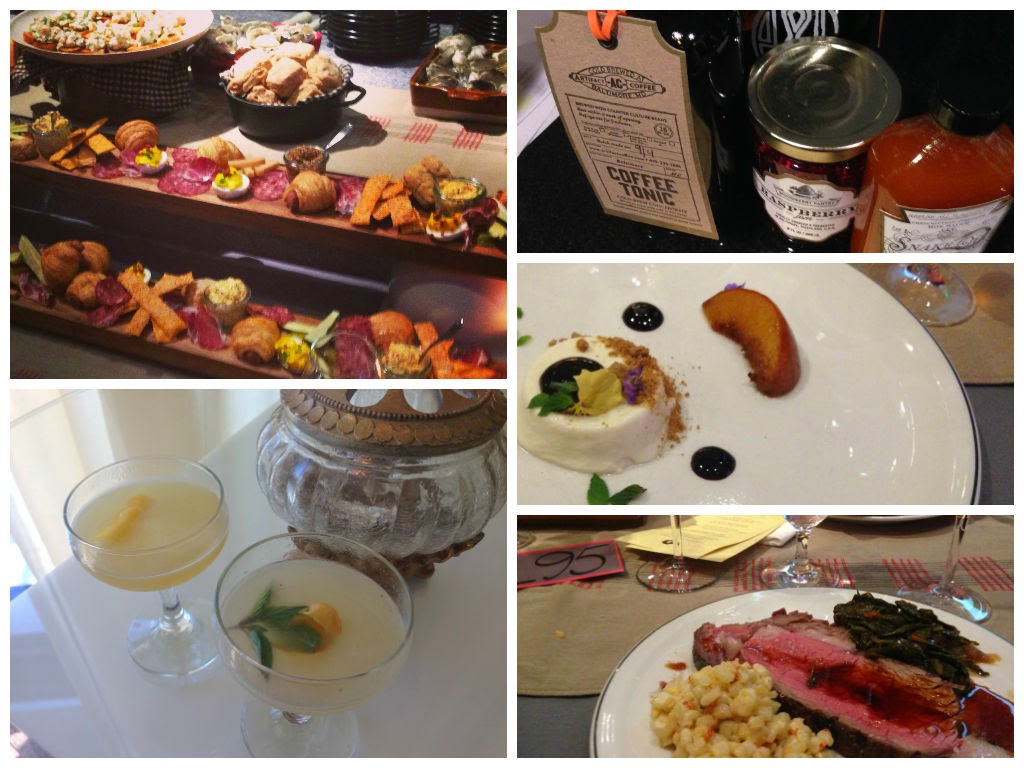 Warning: I do a lot of gushing in this post. I couldn't help it. I had a really special dinner last night.

Last month, I wrote an article that I loved writing, from start to finish. It was about a Baltimore event, called Passion for Food and Wine, that raises money for the Maryland chapter of the Cystic Fibrosis Foundation.

As I explained in the article, the event, which is held at the Four Seasons, is a special one. Seventeen awesome chefs from around the city participate, each cooking an incredible meal for a table of twelve guests. But first, there's a cocktail reception with killer drinks from the city's most special bars. And after, desserts and coffee from amazing baristas and pastry chefs. And wound in, an auction that raises piles of money for a very worthy cause.

The event is truly chef-driven and as a result of the time they spend together planning and strategizing, the chefs who participate have all become good friends. They're funny and creative and totally dedicated to the cause. It's a great thing to see.

So that is a long introduction to this: we had a ridiculously great meal last night. It started with seriously gorgeous drinks from Bookmakers Cocktail Club and Wit + Wisdom (Bookmakers, BTW, is going to just kill it in Federal Hill. There's no way around it).

Then, after being ushered into the dining room, we introduced ourselves to the Woodberry group chefs who were there to cook - Spike Gjerde and Opie Crooks, plus pastry chef Sarah Malphrus, a couple sous chefs and several waitresses. They were all very nice - and watching them work, their attention to detail, was more than a treat. For Cooper and I, who spend so much time eating, cooking and just thinking about food, it was a thrill.

When we arrived at the table, the first course was already laid out - in the form of the longest charcuterie board ever. It was so pretty. Between the pigs in croissants and the totally spicy pimento cheese, we could have filled ourselves on that.

The third course - and probably the most fascinating in terms of plating - was a delicate salad of thinly sliced carrots and radishes with tomatoes, fried okra and - awesomely - chicharones and grilled pork belly. Pig + veggies + crazy texture and color. It was Chef Opie's creation and so impressive, both in terms of actual taste and texture and because it was just cerebral. I loved it.

The main course was more of a homestyle preparation - but just as impressive. The team had cooked a large prime rib, and it was so gorgeous. It was served with braised collards, super sweet corn, potato gratin in cast iron skillets to share and - as a final surprise - a crab cake. I couldn't even come close to finishing...which made me very sad. There was a ton of meat left, too, which chefs from the other tables kept grabbing as they walked past. (Chef Spike sent us home with a carry-out container of meat, too - which was awesome.)

Finally, just when I thought I was going to burst, it was time for dessert - panna cotta with a dusting of buckwheat shortbread, dots of blackberry preserved, a perfectly smoked peach and a few sprigs of some of the mintiest mint I've ever tasted. Somehow, I ate the whole thing.

Each course was paired with an equally amazing wine - W+W sommelier Julie Dalton was responsible for the pairings and, at our table at least, she did a phenomenal job.

Then - at the very end - Chef Spike sent us home with Snake Oil and jelly and coffee and a growler.

Dinner was truly spectacular - both the food and the opportunity to watch the chefs at work (and to watch them joke with each other - it warms my heart to see that sort of community). But as the meal wound down, we watched a video about cystic fibrosis, the impact it has on people's lives, and the importance of what CFF does.

It was a sobering reminder that we weren't just there for fun - the event raises hundreds of thousands of dollars that goes toward research for a cure (92 cents of every dollar raised by CFF goes directly to research - that's a number that wows me). It's impressive and inspirational - and I woke up today feeling honored to have been in the room.
Posted by Kit Pollard at 1:14 PM

Wow! What a great review and a great cause...

It was such a great night, Abby!