How the Irish Celebrate (Sometimes) 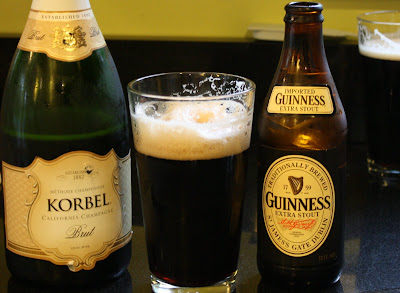 By the time I met Mike and Alicia, they were already engaged, so I didn't go to their engagement party. In the years since, though, I've heard (more than a few times) about what they drank to celebrate: black velvets.

Interestingly, the drink was originally created to mourn the passing of Prince Albert, so it's not exactly a celebratory beverage. But still, it's Irish and it involves champagne, which makes it celebratory enough for me.

After our Dom Perignon debacle on Sunday, Cooper was feeling inspired, so on Tuesday he brought home a six-pack of Guinness. I rooted around in the basement and found a bottle of California sparkling wine (possibly left over from one of Kyle and Mary's wedding events) that would fit our champagne needs, and we started pouring.

Pouring too fast, actually. Instead of looking up how to make the drink, Cooper just started mixing and we ended up with a murky, fizzy mess of Guinness and champagne - not the carefully constructed layered creation the drink is supposed to be.

Plus, while the black velvet was certainly interesting texturally - the smooth Guinness provides a nice contrast to the fizzy champagne - the flavor was a little weirdly bitter for me. I like both pieces separately, but together they just weren't my cup of tea, so to speak.

Does that mean I'm not sufficiently Irish to appreciate it? Or did our shoddy construction influence the taste? Or is it just that it's not supposed to be drunk on a random Tuesday night?