Great Grapes was this weekend - the wine tasting event at Oregon Ridge that also featured a bacon-themed blogger cookoff, pitting me against Kathy (aka the Minx) and John (the Baltimore Snacker). It was a hot day - kind of miserably hot - but we were lucky enough to be under a pavilion, which kept us a little cooler.

The cookoff didn't have many rules, but we did have to use bacon in our dish. Oh, and no nudity, which was probably for the best, what with all that bacon grease flying around.

During my planning process, I asked a few people what their favorite bacony foods are. More than one (including one Bill "Big G" Kelly, aka Alicia's dad) mentioned that bacon is best when its simply tucked inside a BLT. That was it - my inspiration.

Because food always tastes better to me when I know it's story (and because I love infographics), I did a little research on the BLT and ended up making a timeline for the judges: 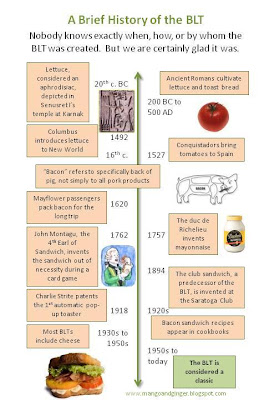 The timeline was paired with a copy of my menu: 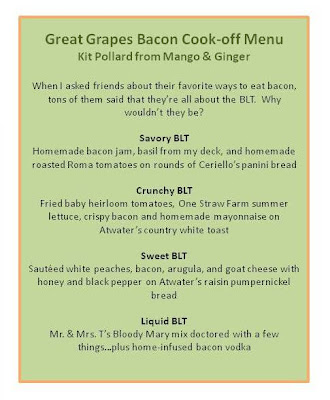 I'll post the recipes, one by one, during the week. Nothing was hard to make and I ended up really happy with how all of it tasted. The sweet BLT, in particular, was kind of delicious. Plus, after the contest, back at home, I made appetizer-sized, open-faced portions of the sweet and savory BLTs - both a success.

And the vodka...it is good.

Now, on to the real pictures. Here I am, hard at work, pouring bacon grease into my little espresso can: 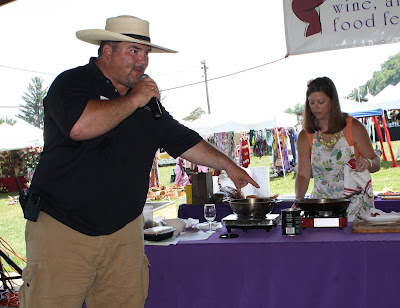 Greg Nivens, the organizer of the Great Grapes events, was the event emcee (along with Dara). To say he's a fan of bacon would be, well, mild. I think it must be where he gets his energy and larger than life personality - he's great. Here, he's explaining to the audience that no one should ever, ever throw away bacon grease. It's just too good.

Here, the judges - Bernadette Woods and Jessica Kartalija from WJZ (who were both cuter than cute in real life) and Hugh Sisson from Clipper City Brewery and Heavy Seas Beer - deliberate over the dishes: 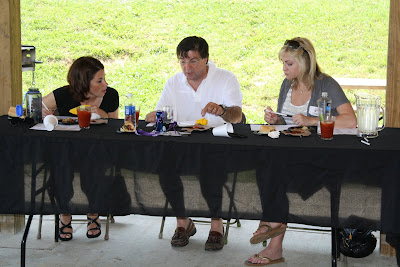 We were rated on taste/flavor (50%), presentation (25%) and creativity (25%). I'm sure that it was a difficult decision, too, because everything I tasted was excellent.

And...the dishes. Kathy (with help from her husband/sous chef Neal) made a BLT banh mi: 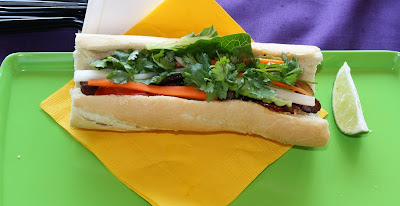 Her sandwich was gorgeous - really bright and fresh-looking - and had nicely balanced spice.

John made an Ethiopian dish - bacon and pancetta wot - which had fantastic flavor (great heat) and was totally new to me. He drove all the way to Silver Spring to make sure he had the best bread for the dish - that's commitment: 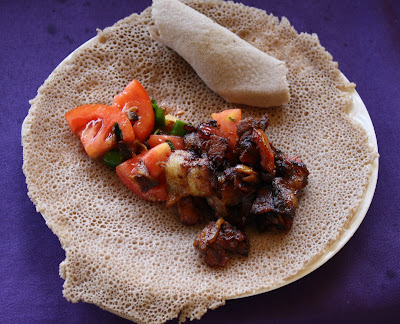 He's already posted the recipe on his blog.

And then there was my plate: 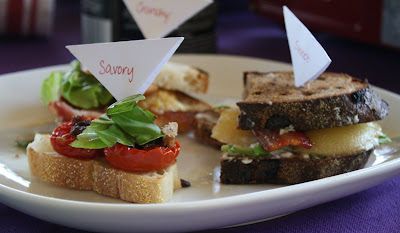 Yes, there is a lot going on. As I said, though, I was really happy with the flavors, which is what's most important, as far as I'm concerned.

Unfortunately, I didn't get a picture of the Bloody Mary's...they looked like Bloody Mary's. But the smoky bacon flavor of the vodka really does come through.

So, in the end...I WON! It was a pretty exciting moment for me, especially since I really had no expectations going into the event. I just wanted to have fun.

Also, I owe a big thanks to my sister, Erin, and her friends LP and Kathleen, who helped me lug the entire contents of my kitchen up to the pavilion and back, and who took a million pictures (including these) because I couldn't. I wouldn't have won without them. I wouldn't have finished without them. Hell, I probably wouldn't have been able to start without them. Also thank you to Cooper for tasting everything (and getting to the event in time to help pack the car back up) and Alicia for doing last minute tasting and advising.

So that was Great Grapes. After the cookoff, Cooper and Erin/LP/Kathleen and I did a little wine tasting and a lot of wilting in the heat, then we headed back to Towson to catch the tail end of the USA-England game, which the county broadcast outside in a courtyard: 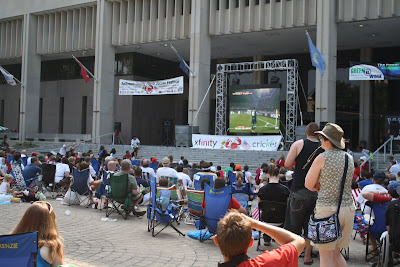 It was a fun event, but, again, so hot. After the game, I wasn't sorry to retreat to my air conditioned kitchen, where we ate bacony leftovers and pizza, and passed some time the way we usually do, staring at baby Maggie: 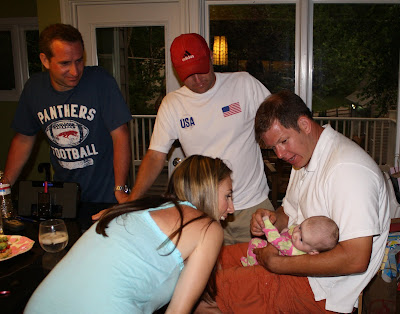 By 9 p.m., we were all settling in for the night and starting off for bed. It was a long, exhausting, hot day, but so much fun from start to finish. Kathy and John were great competitors and I had a blast!

Congratulations Kit!!! What a fun day!

Kit, congrats on the win. Can't wait for you to post the recipes.

Well. hmpfh. Had I known I could have used my bacon jam, I would have! Jam vs Jam, BLT vs BLT3!

Jennifer Hollins said...
This comment has been removed by a blog administrator.
9:47 PM