Brunch at Woodberry Kitchen (with Scrapple!) 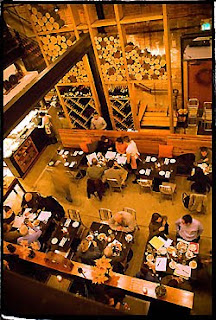 Yesterday morning, I met my high school girl friends (Suzanne, Alison and Mandy) for brunch at Woodberry Kitchen. It was slightly cursed at the start - at some point during the morning, a warehouse in the vicinity of the restaurant caught on fire and the fire department shut down a ton of roads in the neighborhood. Including the road right in front of the restaurant, where they ran a huge firehose that ended up springing a full-on geyser of a leak.

Once we got there, though, things looked up considerably. Everything was, as usual, pretty fantastic. Mandy and Alison, the vegetarians, had the winter vegetables over gravy, which they both liked a lot. Suzanne had pear crepes that looked fantastic, and I had goat cheese ricotta pancakes with honey and a side of scrapple.

My pancakes were great - I didn't even put butter on them and they were light and fluffy and moist. Loved them with honey. And the scrapple was, of course, amazing. Amazing and conversation-starting.

At the end of the meal, our waiter said to me, "Can I ask you something sort of presumptuous?" We all looked at him like, "WHAT exactly?" So I said yes and he asked when I started eating scrapple. I'm not sure what I was expecting, but that wasn't it.

So I told him that I'd eaten it all my life and he nodded, saying that most people who order scrapple have been. He asked where I grew up and I told him that, too, and he mentioned that it seems to be an Eastern Shore thing. We talked a little about the Apple Scrapple festival in Bridgeville, DE - he suggested I go - and, after Mandy asked, what scrapple is made of ("it's kind of like pate, but fried," he said). On my way out, he gave me a "go scrapple" thumbs up.

Then I ran into one of the hosts in the ladies' room, where she asked me what I ate and we had nearly the very same questions about the scrapple.

All of that made me wonder - when did my scrapple-eating start? I've eaten it for as long as I can remember and I order it all the time at diners. I called my dad last night and asked him why we eat scrapple. He confirmed that my mom doesn't eat it, but said that he doesn't think he ate it growing up - he started sometime later, but he can't remember exactly when.

I sometimes think of the mid-Atlantic as lacking a whole lot of regional foods or flavors. Yes, we've got crabs, but that usually seems like about it, and one food does not a region make. Then I remember that foods I've eaten for my whole life - like scrapple - are actually regional specialties. And when you put together all those regional specialties, you end up with an actual regional cuisine, not just a bunch of one-offs.

[I did not actually take that photo. It's from City Paper and was taken by Christopher Myers.]
Posted by Kit Pollard at 7:30 AM

I briefly contemplated ordering an egg and scrapple sandwich for breakfast the other morning at a cafe near work, but switched to bacon instead. I think the first time I tried it was about 3 years ago and I did like it. Not even close to pate...lol...closer to cornbread with meat scraps in it.

Erin & I had the same discussion yesterday! I ordered scrapple for our brunch. I can't remember when I first had it, but I've grown up eating it and love it. Peter (who grew up in Western Mass.), on the other hand, never tried it until recent years and does not like it at ALL.

I still haven't been to Woodberry for brunch. I really need to, don't I?

Libby - Peter is wrong and I'm sorry for you about that. But happy birthday!

Nakiya - yes, you totally do. For real.