Designing Tuesday: Relief from the Cold

A new year, a new angle for my Tuesday posts. In 2008, Tuesdays were all about food quotes. In 2009, they were dedicated to ideabooks. This year, I'm moving beyond just ideabooks (they won't disappear entirely) to broader posts about design. Mostly, really, about pretty rooms and stuff I think is cool.

Speaking of cool, WOW it is cold right now. Last weekend, we spent three of the chilliest, windiest days ever in Fenwick Island, and somehow nothing seemed to warm up when we arrived back in Baltimore. With that in mind, I guess it's no surprise that I am obsessing over these Rene Caovilla shoes so much that I posted a link to them on Facebook: 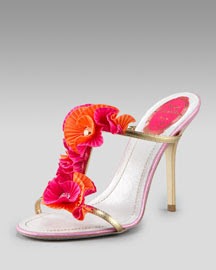 Sadly, at $975, there's little chance they'll be gracing my own feet anytime soon. (If I bought them, I'd better hope they also come with a divorce attorney. Cooper would freak out.) But that can't stop me from dreaming about the fabulous party to which I'd wear them.

And you know where that fabulous party would be? Miles Redd's back courtyard: 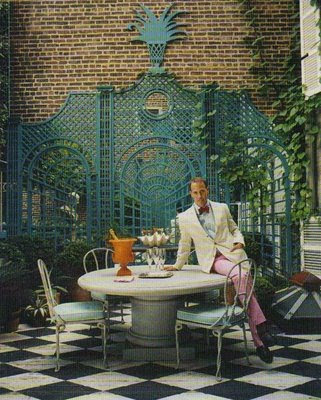 He's one of my favorite designers (how could he not be? Look at him!). His courtyard was part of a feature in the April 2008 issue of Domino (RIP). I loved it as soon as I saw it - I even tried to convince Cooper to let me paint the floor of our grown-up swingset (the structure where we have our hanging chairs) in a black and white checkerboard pattern. Unfortunately, Cooper's not 100% with me on the Miles Redd-worship.

But just imagine the party in this space: 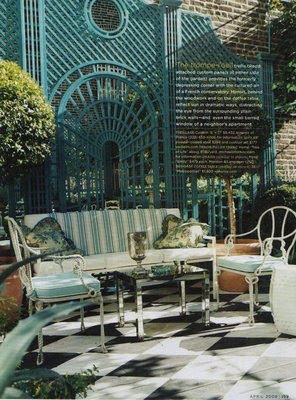 How great is that table?

I can totally imagine the party, too. The courtyard would be dressed in tiny, twinkling lights and the menu would be all champagne and hors d'oeuvres.

And I would get a million compliments on my shoes. Sigh. If only.