Question: How'd That Chicken Turn Out? 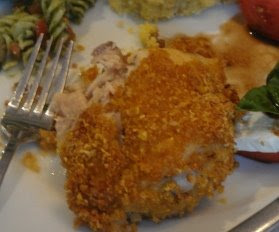 Nice, in-focus picture, huh? That's what happens when I remember to take a photo mid-meal.
As I mentioned on Friday, I was in a picnicky kind of mood, which was handy, since I was already planning on making oven-fried chicken (based on this Chowhound recipe). I wasn't planning on making much else, though, so instead of actually cooking anything to match, I picked up some pesto pasta salad and mozzarella from Ceriello, plus a couple of tomatoes from the market (we've got basil in the yard). Alicia brought over cornbread, we opened some rose, pretended the dining room table was a gingham cloth on the ground outside and that was that.

But the chicken? How was it? Again, not bad. The cornflake crust was good (though I'd spice it up a bit next time) and the chicken itself was cooked really nicely. Unfortunately, since the chicken's not actually fried, the skin never gets crispy - so it's kind of weird and yellow and slimy. Next time - and I will make this again - I'll remove the skin. Sad, kind of, since the skin is such a great part of fried chicken.

But at least now we know. And overall, not a bad meal, especially for a quiet, mid-summer Friday night.
Posted by Kit Pollard at 10:11 AM

These are a sort-of variation on what you made-- and VERY popular at our house.

Oh - I make those, too. Also VERY popular at our house, with everybody. They're great.