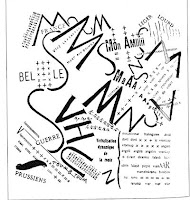 Is it possible to write about Italy without writing about food?

Just out of college, fresh from my art history classes, I might have said yes. After all, it's not like every Italian work of art is food-centric. But after reading this Slate series by Kate Bolick, I'm not so sure.

The series starts traditionally enough, with a trip to Italy. Bolick and a small crew of intellectual/academic friends headed to Rome and Milan this past February to explore the world of the Futurists, 100 years after the publication of their not-actually-that-famous Manifesto.

But let me skip to the end. Several months after the trip, back in New York. Bolick and one of her co-travelers, artist Karen Azoulay threw a Futurist-inspired dinner party. The dinner sounds kind of insane, but totally cool in that way that theory-based dinners are cool. It's a natural product of studying the Futurists, anyway, since the 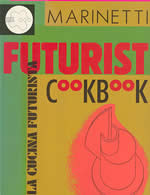 y're one of the few artistic movements (that I'm aware of) that published a cookbook.

The Futurists were really proto-Wylie Dufresnes, seeking to bring science into the kitchen and to change the way people think about food in general. They understood the powerful role food plays in our lives - Cookbook author and Futurist leader F.T. Marinetti wrote:

"A given taste of something can sum up an entire area of life, the history of an amorous passion or an entire voyage to the Far East."

Totally. Of course, Marinetti sought to destroy the food that would remind Italians of their heritage, just as he wanted to destroy museums and libraries and other institutions that house the past. He felt that escaping the past and forgetting it was the only way to embrace the future.

And maybe he was right, for Italy anyway. Not entirely, of course - technology hasn't completely avoided Italy. It's not like Italian teenagers aren't texting all over Rome, just like the kids in America and Sweden and Australia and everyplace else. But Italy's brand, for lack of a better term, is still rooted firmly in the past. The way, way, way past. And the food is a part of that.

In the article, it's not the dinner party scene that makes this painfully obvious - that's expected, an 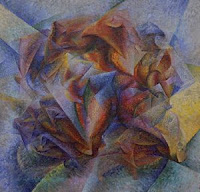 d still feels pretty avant-garde, actually. No, it's the trip. The friends amble through Italy, dizzying themselves with technology-obsessed art and discussing the less appealing aspects of Italian Futurism (the fascism and misogyny).

And eating. They look longingly at spinach and ricotta tarts, even as they munch on pizza bianca and seek out pasta carbonara in the shadow of the Coliseum. The food they eat has been a part of Italian culture for centuries and it looks likely to stick around for centuries more.

The author is conscious of it, too, and one of her guests admits that if he was a teenager growing up among the classical ruins and Renaissance worship of Italy at the dawn of the 20th century, when the rest of the world was moving full steam ahead into the future, destroying the past might have seemed like the only way out.

To answer my initial question, no. I don't think it's possible to write about Italy without mentioning the food. Not to write well, anyway.

On the last page of the magazine, Bon Appetit runs a column called "Feedback," in which celebrities answer a handful of questions about their food preferences. They're always asked "of all the places you've traveled, where did you have the best food?" Invariably, they answer, "Italy."

It's a blessing to have that kind of reputation - to the outsider, anyway. But to a frustrated teenager yearning for something new, I can see why all that pasta, and everything it means, might feel more than a little stifling.

[Images: Graphic art by F.T. Marinetti; Cover of the Futurist Cookbook; Dynamism of a Soccer Player by Umberto Boccioni]