Now that Memorial Day has come and gone and everyone at my house is 100% over school (despite the fact that school itself is not actually over), it's time for a big, long recap of all the things I've neglected to write about over the past couple months.

So here it is: the parties and drinks and meals that made Spring 2016 fun (but that haven't made it onto the blog until now):


Way back in March, I helped my brother and sister throw a 70th birthday party for my dad. We ate oysters and Boston cream pie and drank a ginomrous bottle of French wine. We decorated my parents' screened in porch with old photos (my sister's idea) and about 10 million of those poms you have to manually fluff.

We also, at the last minute, thought it would be fun to have a photographer come to take some family photos. Rachel Rock came to the house and took some awesome pictures of all of us - and she was very fun while she did it. Most of the pictures below are hers: 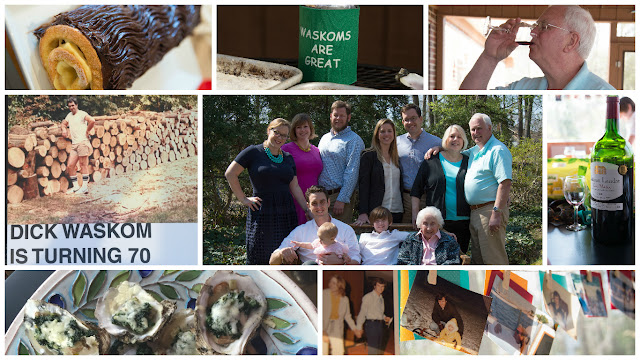 Also back in March, Cooper and I went to Cellar Sessions, a wine class with Wit + Wisdom's sommelier Julie Dalton. She is so smart and good at her job.

The class was no joke - she walked us through how to blind taste wines like a sommelier. Walking into the class, we both thought we knew some things about wine - this was not the first tasting class we've taken. But it was definitely the most intense in terms of knowledge. As a result, Cooper's wine vocabulary and ability to pinpoint specific aromas and flavors has increased significantly. (I still mostly smell fruit and booze when I stick my nose in a glass...his palate continues to put mine to shame.) 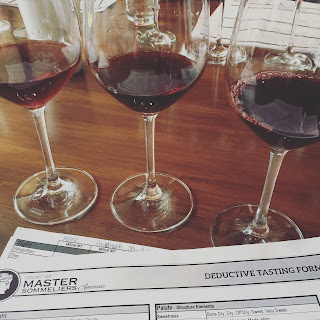 In April, I was a judge at the Taste of Pikesville, which was hectic and fun and full of surprises, like an excellent bread pudding from FutureCare, pretty sushi from Wegmans and a smorgasboard of Uzbek specialties from the guys I love at Silk Road.

I also left with this gorgeous collection of chocolates from Raimondi's. They tasted even better than they looked. 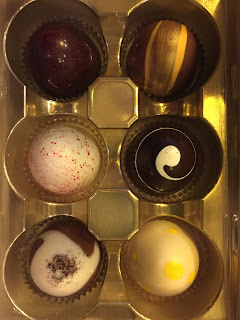 After a couple years of not being able to make it for one reason or another, Cooper and Dixon and I finally made it to The Emporiyum, the big, roving food festival.

I spent the first few minutes feeling totally overwhelmed, but once I got acclimated, I loved every second of of the experience. Some of my favorite food people were there, like the crew from Clavel and Nick from The Local Oyster, and I had my first taste of an Ekiben steam bun. It totally lived up to the hype. And there was a lot of hype. 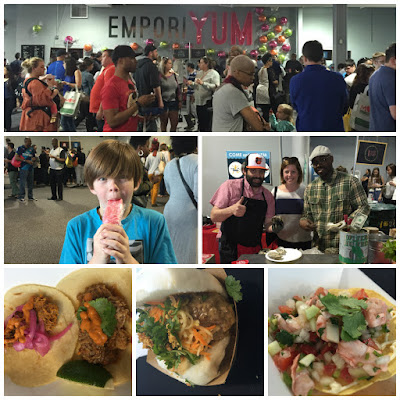 One sunny Saturday afternoon, Cooper and Dixon and I drove up to John Brown General and Butchery, which met all of my very high expectations. Not only is the place adorable, it's also filled with incredible meat, cheese, wine and other things I didn't even know I needed in my life, like a fistful of ramps (later grilled) and a plastic tub of creamy fresh ricotta. 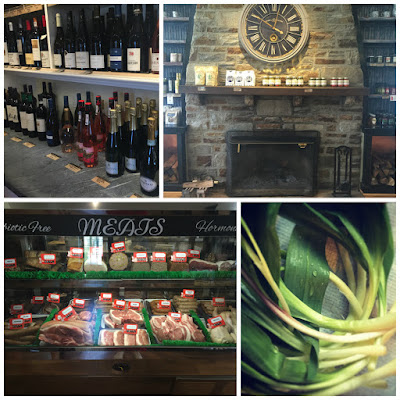 One quiet Monday night, after a hellish day of writing, I had drinks with Charm City Cook at WC Harlan, followed by queso fundido (and more drinks) at Clavel. It was my first trip to WC Harlan, which was, as I expected, very cool and the drinks were thoughtful and creative and completely delicious.

The whole experience improved my day (and week) considerably. "Monday night drinks" sounds risky, but in this case, it was nothing but smart. 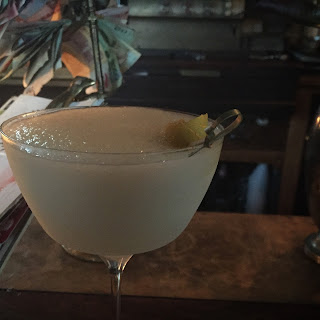 One good way to justify Sunday afternoon drinks and apps is to present it in class form. That's how I found myself drinking and eating my way through an afternoon at Bookmakers (again with Charm City Cook). CCC and behind-the-bar master Ryan Sparks teamed up for an Instagram class that genuinely helped me with my crappy picture-taking skills.

Also, it helped me enjoy my Sunday. Because, how couldn't I? 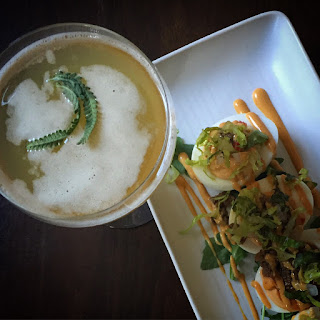 Baltimore's food scene has been exploding over the past couple years - and that's especially noticeable right in the middle of the city, near Hampden/Remington/Clipper Mill, where new restaurants and food-centric mixed use real estate projects are popping up every day.

I checked out one of those developments, Whitehall Mill, during a fun event organized by Baltimore magazine and CCC (she gets around). Whitehall Mill will include a pretty massive food hall and a restaurant, which is great  news for anyone who likes to eat. 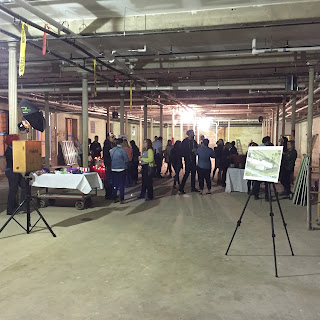 At the end of April, I met college friends in New York and had brunch at Hudson Clearwater and drinks at Grand Banks (it's a bar on a sailboat!) and dinner at The Greenwich Project.

The weather was gorgeous, we drank a boatload of rose and prosecco, and it was so much fun. We hadn't all been together in twenty years, so the weekend could have, theoretically, been awkward. It wasn't. It was great.

Also, I want to give a special shoutout to the staff at The Greenwich Project.There was a seating mixup while we were there - something annoying but that could've been fixed with a single round of drinks. Instead, they bought all of our drinks and dessert - and encouraged us to keep ordering more. They went above and beyond to make sure we had a good time. So we did. 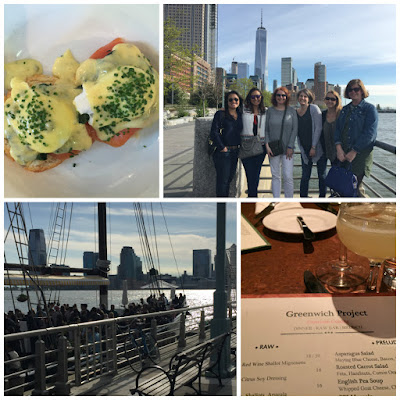 In mid-May, I went to Black-Eyed Susan Day, where we ran into Bowtie Bob, did not win any money, had our picture taken by an ESPN photographer, and were reminded that hats can seriously impede peripheral vision. Also, they make my head hot. But they're so cute!

Black-Eyed Susan Day, the day of races before Preakness, is billed as a ladies' day (though there are lots of guys there, too). Mostly, it's known as a more manageable, more grown-up Preakness for locals. There's still some great people-watching, but BESD does not involve the sort of infield antics that Preakness is known for. It's a good time! 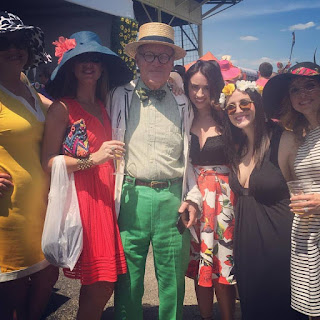 Finally, we spent Memorial Day on Keuka Lake with Mike, Alicia and Maggie, watching Dixon learn to SUP while eating and drinking our faces off - including a trip to McGregor (my favorite Keuka winery) and two trips to The Olney Place, where Cider Creek's Cran-Mango Saison became my new favorite thing. 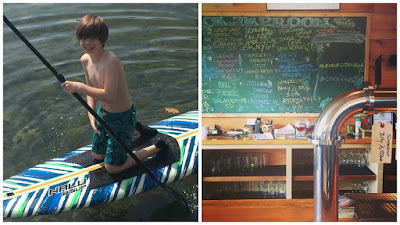 This isn't it, of course. There have been little girls' birthday parties and back porch dinners and a mother-son Oriole's game and two museum-heavy DC visits and a whole bunch of other fun things. It's been a great spring...and all signs are pointing to a summer that's just as eventful.
Posted by Kit Pollard at 7:11 AM