It's been a busy couple months around here. We've been getting out and about quite a bit, which means my "stuff to write" list is painfully long.

Here's a quick recap of two of the best dinners we've had over the past month: 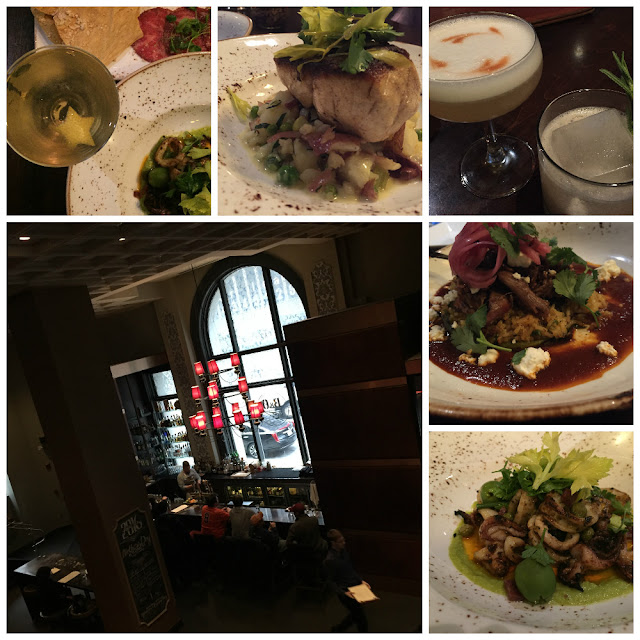 Just yesterday, I learned, via Facebook, that B+O chef Michael Ransom is leaving town, heading to Detroit to open a place of his own. Great news for him, sad news for us. Ransom's food is thoughtful and lovely - and he's such a nice guy.

At  the end of April, we tasted a selection from B&O's new spring menu and, across the board, it was excellent. There was rockfish and steak, a beautiful charcuterie plate, and charred calamari that was really special.

But our favorite dish was definitely the lamb relleno. The pepper was stuffed with dirty rice and pulled lamb - and it was so, so good. Spicy, but not overly so, and genuinely interesting.

Dinner also included several cocktails created by the incomparable Brendan Dorr, one of Baltimore's best bartenders. His drinks are creative and smart - and delicious.

Our favorite was the Purple Rain (created and named just before Prince's passing). Lavender-infused cachaca, lemon and honey apple shrub. It was light, but potent, and it came with a lesson on shrubs that vastly expanded my knowledge. As is so often the case, I thought I had a handle on the subject, but discovered that what I knew was only a tiny tip of the iceberg.

Overall, the meal was really nice - and a good reminder that B+O does it right. The space is fantastic, the service prompt and both the food and drinks very good. If you haven't been in a while, go. 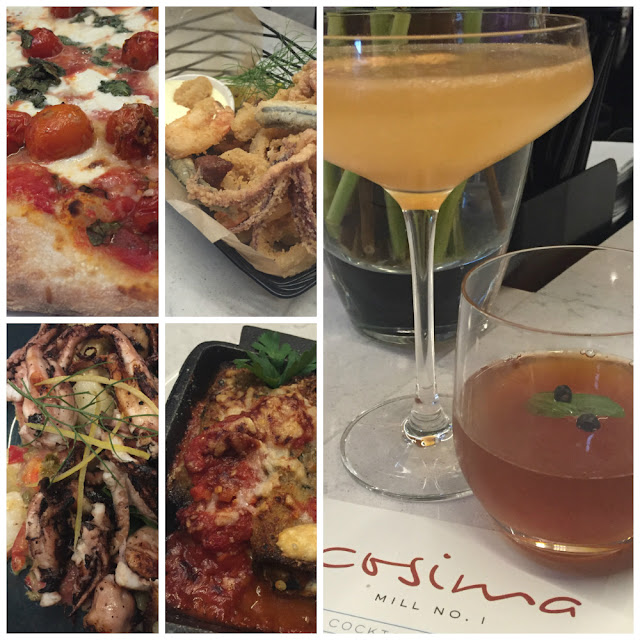 Cosima, in Mill No. 1, opened earlier this year to seriously fabulous reviews - the kind every restaurant hopes for - praising both the space and the food. It's been on our short list since then, though because it feels somewhat like a special occasion place (in part because it's on the pricier side), it took us a few months.

Ultimately, the special occasion that finally got us to Cosima was nothing more than a standard Thursday night. When we arrived, the restaurant was fairly busy. We took Richard's advice, finding a couple seats at the bar and ordering several smaller plates and one pizza, all to share.

The pizza crust was terrific and we loved both the basket filled with fried seafood (whole sardines!) and the grilled baby octopus. But my favorite dish - and it came as a surprise, since it was a late, somewhat random addition to our order - was the involtini. Ricotta-stuffed eggplant, placed in a small cast iron dish and surrounded by a simmering red sauce, was seasoned absolutely perfectly - a feat that happens less frequently than you might think. (We are super judgey about appropriate seasoning.)

I'd also like to give a shoutout to the bartenders, who were completely on top of things and knew the wine list backwards and forwards. They took turns offering me wines they thought I might like - and impressed me repeatedly.

Sitting at the bar, for just the two of us on a random Thursday, was absolutely the right call. Though the people sharing tables looked happy, too - and the space is gorgeous.

The city has seen a bunch of high profile openings recently and there are more new openings announced every day. Plus, the restaurants that have been around for a while have seriously been stepping up their games. It's a great time to be a restaurant lover in Baltimore.

My restaurants-to-visit list keeps getting longer and longer - but it's one to-do list that can grow and grow. I don't mind a bit.
Posted by Kit Pollard at 6:10 PM

I went to Cosima for a birthday... seems like the seafood stuff is the way to go there, everyone who got fish was wowed.
Aaaand hope to try B&O for my own birthday next month. I hope the staff change goes well... I'll take cues from your favorites if they're still available..

If that lamb is on the menu at B&O, get it! By next month, I bet there will be an updated cocktail menu, too - the drinks there are so good. I used to work in the building next to it. Wish I still did, just so I could go to happy hour there!