Last week, at the Fork and Cork dinner, we ended up sitting with the couple who owns Elk Run Vineyard in Mt. Airy. They were super nice, as were their friends, a couple who own an orchard in Carroll County and who pickle all sorts of things.

We got to talking, as people do when they're eating and drinking together, and Carol, from Elk Run, mentioned that Bryan Voltaggio had once done a dinner at the vineyard. He had, she said, the best tasting memory of anyone she'd ever met. Long after he tasted their wine, he could clearly recall it - and pair it.

I wish I had that. My memory-memory is pretty solid...but I just don't have a chef-level tasting memory. At all.

Slightly random, but there are two things I've noticed popping up all over the place lately: Tom Waits and toffee. I don't think they're connected. But who knows. 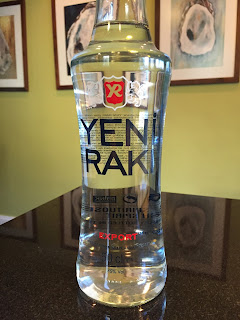 We had dinner last night with my old friend Rasim - and he brought us gifts. Since the last time we
hung out with him, he'd been to visit "the motherland" - for him, that means Turkey.

Because he is an awesome friend, he brought us gifts. For Cooper and me, a bottle of Yeni Raki, a liqueur mixed with water and made from grape and anise seed. As far as I can tell, it's a close cousin of pastis and I am psyched to break into it. He told us about some of the restaurants he visited on this most recent trip, including one that serves nothing but this drink and fried fish. The food in Istanbul sounds amazing - he seriously sells it.

He also brought Dixon a box of chocolate covered cekme helva, which is a Middle Eastern candy with almost a papery texture. It's totally unlike anything in Dixon's bag of Halloween candy and, unsurprisingly, he loves it.

Candy and booze, both with international flair. I have been friends with Rasim for 35 years (!) for many reasons - including, obviously, his generosity and capacity for solid gift-giving.