As I mentioned last month, this is the year that most of my high school friends turn forty - which means this year, we will go to a lot of parties that involve black balloons.

February is a big month for us, with the birthdays of two of my oldest friends - guys I met in kindergarten at Benfield Elementary (one of the top schools in the country, obvs). Rasim and CJ both turn forty this week - Ras on the 22nd and CJ on the 25th. The original plan was to celebrate them with a party at Kooper's in Fells on Saturday night (organized by more Severna Park friends - our high school friend Chris and his tireless wife Adrienne). But the weather had other plans - and fortunately, Kooper's was very cool about letting us move the party to yesterday afternoon.

So from 4 until 7 yesterday, we took over the upstairs of Kooper's, drinking and eating burgers and nachos and pizza (on Rasim's tab - thanks!) and listening to some deafening 90s rap. Around 6:30, a transformer blew, leaving a bunch of Thames Street and lower Broadway without power. So...it was memorable in more ways than one.

Adrienne absolutely crushed it with the incredibly delicious, incredibly funny cake, from Herman's in Dundalk, and with a poster including tons and tons of old pictures of all of us. A fake Instagram photo prop, amazing cookies and tiny bottles of Fireball as favors were hilarious and really quite delicious (the cookies, anyway). 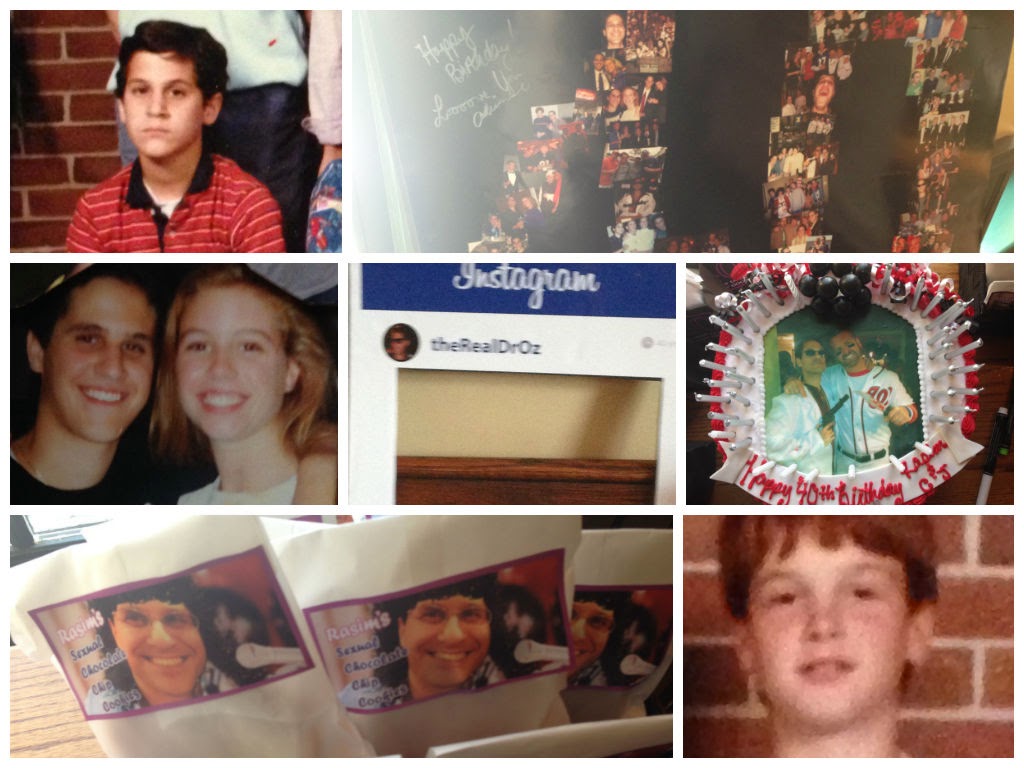 Top row, from left: Rasim in our 5th grade class picture; the "40" poster, which we all signed. Middle row: Rasim and me in a picture from high school; the Instagram prop; the cake. Bottom row: Rasim's "Sexual Chocolate Chip Cookies"; CJ in our 5th grade picture.

We'd actually had dinner with Rasim and Chris and Adrienne at our house, not too long ago. A little backstory: Rasim went to the University of Michigan. Last fall, when the Orioles were playing the Detroit Tigers in the playoffs, he and a college friend made a bet on the series.

Rasim won, obviously, and his prize was a $100 gift card to Zingerman's, the incredible deli and specialty foods store in Ann Arbor. Rasim quickly turned the card over to me, with the understanding that I'd use it to make him dinner.

So we figured out a time for Rasim to come over, and invited Chris and Adrienne, too. The dinner presented a couple challenges: Rasim doesn't eat pork and Chris is allergic to shellfish. So...that takes a lot of proteins off the table.

Nearly all the meat Zingerman's sells is of the porcine variety, so I decided that instead of buying core ingredients, I'd buy a few of their cool sauces and marinades. They source from all over the world and end up with a genuinely interesting mix of products. 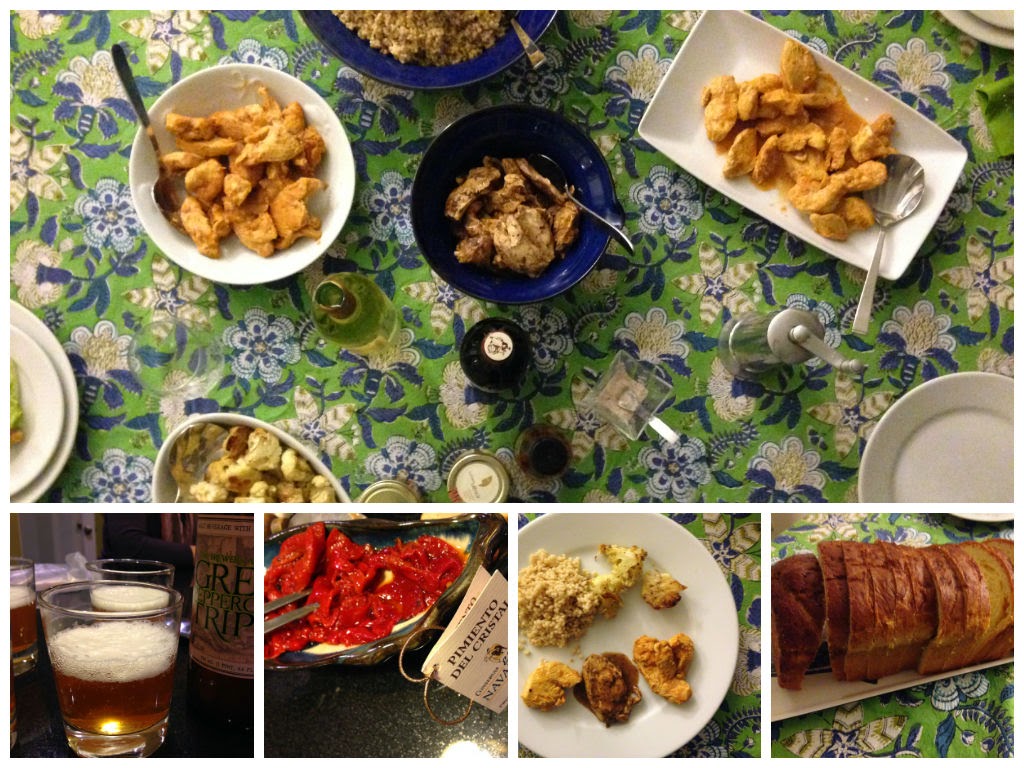 The meal, then, was an experiment. I used chicken as the base protein, simmering chunks of meat in a trio of spicy sauces. Maffe sauce, from West Africa, was peanutty and rich. Yassa sauce, also from West Africa, was intensely spicy. And a Jamaican jerk sauce was full of herbs - and, like the others, pretty hot.

My favorite was the jerk - I liked the flavor of the dried herbs, and that the heat didn't overwhelm the other flavors. But everyone had their own preference.

Before dinner, we had some cheese and crackers, and some very fancy roasted Cristal peppers from Spain, washed down with Brewer's Art's Green Peppercorn Tripel, courtesy of Rasim (really, it was all courtesy of Rasim).  True to its name, the beer was packed with green peppercorn flavor.

With the chicken, I made roast cauliflower (always a hit) and sundried couscous from North Africa, which was genuinely better than grocery store couscous. The pearls were large, like Israeli couscous, with smooth texture and fuller flavor than I expected.

After dinner, we ate Craquelin bread, a brioche studded with orange zest and sugar cubes soaked in Grand Marnier. That makes it sound like it's super heavy and boozy - but it wasn't. The bread itself is somewhat dense but overall, the slices weren't overwhelming in any way.

Dinner was a blast - as was this weekend's party (despite the numerous disasters threatening the party's success).

And both events, of course, gave me more than ample opportunity to reflect on how lucky I am to have had such great friends, starting at a very, very young age.
Posted by Kit Pollard at 9:34 AM