This (Past) Week: DRP Turns Nine

It's been a big week at our house. A big, long, exhausting week full of celebrating Dixon turning nine. Nine! Those years have flown by.

His actual birthday was on Tuesday. At his request, we headed down to Fells to have dinner at Papi's Tacos. It's his favorite queso in the city. It was raining, but Papi's little back patio is covered, so we could sit out there anyway. It was kind of a steamy hotbox, but none of us really minded. The queso and tacos and - for me - boozy jalapeno limeade made it easy to forget about the humidity. 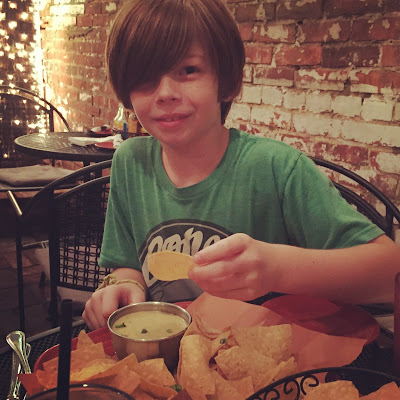 Wednesday and Thursday were standard-busy with work and work dinners - and birthday party prep. Dixon's party was on Friday afternoon and the theme this year was Sharks and Zombies. He didn't want to have any set games, so instead we (I) created two photo booth type areas - one shark-related and one zombie, related.

I found a lot of pretty sweet zombie and shark attack accessories - and I was especially pleased with the blood spattered shower curtain I got from Amazon. Seven dollars seriously well spent. 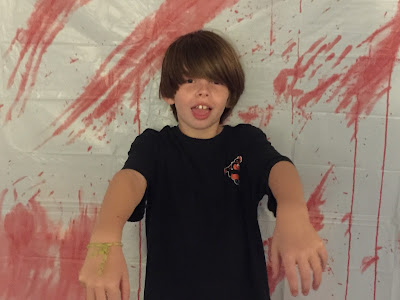 For the sixth year in a row, Dixon and Alicia collaborated on his birthday cake. This year, unfortunately, I made the wrong size cake, so the decorations were a little oversized. But they were still pretty pleased with their work. 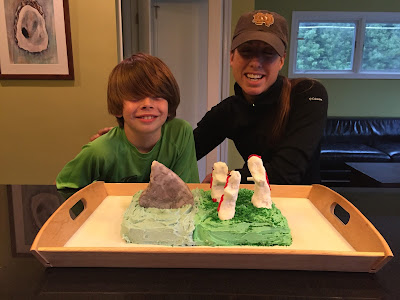 What the picture can't show: how insanely good Alicia's buttercream is. 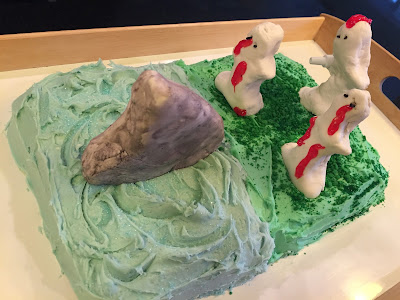 We have had Dixon's parties at our house every year since he was born. There is, frequently, a chance of rain during the party. But the weather always comes through for us, so the kids can run around the yard.

Always, that is, until this year. Instead, we had a couple dozen nearly-tween boys wreaking havoc on our basement while they beat each other with Nerf weapons. It was...loud. Fortunately, in the end, no one required stitches or a trip to the hospital or anything.

Still, I have learned my lesson. That was the last year for that kind of party. Dixon agrees. Cooper really agrees.

When they had cake to focus on, though, they almost look angelic. 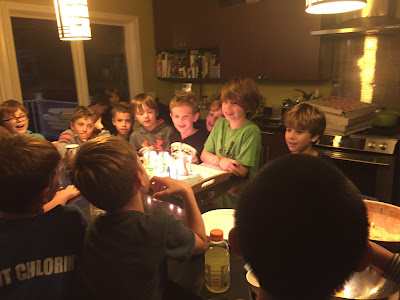 And then the night ended. 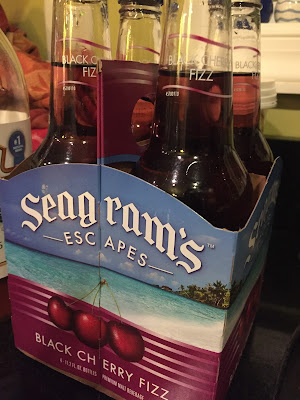 Just kidding. I really didn't close it out with wine coolers. I closed it out with red wine. But Bill brought me this awesome four-pack of Black Cherry Fizz as a "good luck with the party" gift. He's a good friend like that. I will be saving these for a rainy day.

So now Dixon is nine - and my basement is still a wreck. But he's happy. (Until tomorrow, when I make him start writing his thank you notes.)
Posted by Kit Pollard at 4:57 PM