Back in the early days of the blog, I used to write occasional posts under the heading "food flashback." They were stories about particular meals or ingredients or other food memories from my pre-blog life. 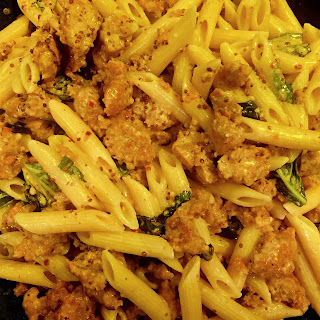 At the time, I was still pretty new to cooking. I started learning, in earnest, around 2002. I cooked a lot in the three years before starting to blog - but I was really just starting out. I might have had food memories in my past, but I hadn't developed any cooking memories just yet.

Tonight, I was cooking one of my old standbys, sausage and pasta in a sauce of cream, wine and mustard. Even though I only make it in the fall and winter, it's a recipe I know by heart, so I don't have to concentrate so much on what I'm doing. My hands just do it.

Since I wasn't overly focused on a recipe, my mind started to wander, thinking about all the times I've made the dish in the past. It first appeared in the September 2003 issue of Food and Wine - twelve years ago!

I remembered how the first time I made it, right after the issue came out, the sauce seemed weird as I was cooking - broken - and when I mixed it with the pasta, I was worried that it would be boring, or there wouldn't be enough. (But it was.) Cooper and I had just moved in together back then and I was cooking for him and for our friend Sam.

I remembered that right after our friends Steve and Sheila moved to Buffalo, they called me and asked for the recipe. They'd been the kind of friends we saw four times a week, eating so many meals together around the oval table in the open kitchen of our old house, which Cooper bought before we were dating, and where he lived, before we moved in together, with Sam and Steve's brother Bryan.

I remembered the year that I made it one too many times, and we were so sick of it by March (which is usually when I retire the recipe).

At dinner tonight, Dixon mentioned that we hadn't had the pasta in a while; we explained that I only make it seasonally.

I liked,though, that he remembers it. It means that we're still making those memories. With pasta, and with so many other good things to eat.
Posted by Kit Pollard at 8:26 PM