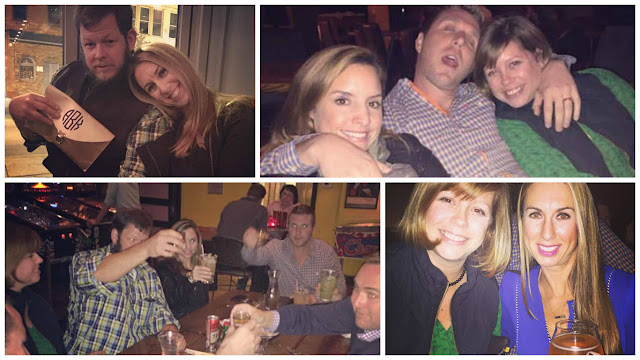 All the photos above were swiped from Alicia's Facebook. Clockwise, from the top left: Cooper, Alicia and Alicia's cute bag at 13.5%; Kyle, Mary and me right after Kyle pranked Mike, also at 13.5%; Toasting Bill (with tequila shots) at Holy Frijoles; Alicia and I enjoying some serious beer at De Kleine Duivel.

Bill turned 42 last Sunday, which doesn't seem like all that exciting of a birthday. Oh, but it can be.

Our little local group has been super busy lately - no busier than usual, probably, but as all of our kids get older, it does feel like our lives get more hectic. It used to feel like we spent at least three nights a week basking in the glow of one another, just standing around somebody's kitchen island, drinking beers, eating pizza from Toss and making funny jokes. Now...well, we still do that. But it doesn't seem as frequent.

Last weekend, though, we just crushed it. Friday night, we ordered sushi at Kyle and Mary's, sat around, drank wine and made ourselves laugh so hard I am sure someone wet their pants.

Saturday, we organized some babysitting and went out to celebrate. First, Holy Frijoles, where Alicia's brother is a manager and the chili is just gorgeous. Then, De Kleine Duivel, where I was approximately 6,000% less cool than the average customer...but I loved my sour beer. (I asked for the least sour sour beer, as I know that will be my favorite, and the Liefmans was exactly what I wanted.) We ended the night sitting in the front window at 13.5%, where we drank some wine (Spanish) and some cocktails (gin-y) and I got to check out the scene in Defie Mois, the new late night basement space. I just rolled down for a quick second and we didn't eat, but it was cool. Also, Kyle tied Mike's shoelaces together while we were all sitting at the table. Apparently that is a joke that transcends age.

Finally, on Sunday, everybody came over to our house for meatball sandwiches (with very nice meatballs from Ceriello...in part because I didn't know that Mastellone's closes at 2 p.m. and we arrived at 2:06!). They were delicious - but not as delicious as the pretzel and ice cream cake Missy made for Bill. It was his actual birthday on Sunday and I feel confident saying that it was a good one. He watched his kids play soccer then ate meatballs and ice cream cake, which is totally his favorite, then closed out the night with red wine and a fire on our patio. Gorgeous, all around. The night, the fire and the whole weekend. We get so busy...but we do have a good time.