The first time Cooper and I ate Cyrus Keefer's food, it was April of 2012 and we were reviewing the now shuttered 1542 Gastropub, which was located in one of those restaurant dead zone spots on the outer edges of Federal Hill.

That night, we took one bite of octopus and freaked out. It was so tender and so well-seasoned. Everything we ate that night was awesome. We've probably been  to close to 200 restaurants since then...and it still stands out as a memorably great meal.

Since the 1542 days, Cyrus has helmed several solid kitchens, including Birroteca and Fork and Wrench. People love him - and with good reason.

Now, he's opening his own place, a BYOB in Hampden, and he's raising money, with a Kickstarter campaign and also via a multi-course dinner he threw last week at Sotto Sopra (which, very generously, allowed him to take over the entire restaurant for a whole Thursday night).

The meal was totally fun, with all kinds of food people in attendance, including Chad Gauss from The Food Market and Cyrus's former boss, Robbin Haas, the owner of Birroteca. Chefs supporting chefs...it warms my heart.

And you know what else warms my heart? Kickass food...which is what we ate. My photos are, predictably, crappy - but trust me when I say the food itself was gorgeous. 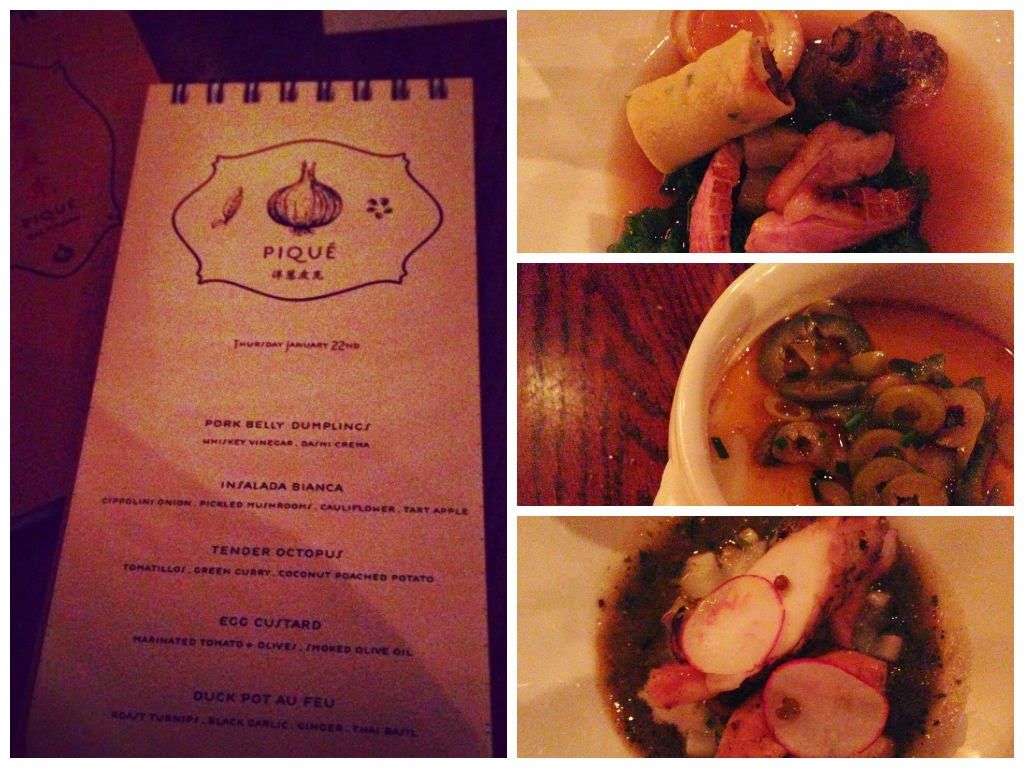 In addition to the seated dinner, the meal started with passed appetizers, including incredible beef tartare spoons and the escargot buns that Cyrus made famous at Fork and Wrench.

Dinner itself was creative, technically perfect and wonderful all around. The octopus was, predictably, my favorite - texturally, it was just phenomenal. And sandwiched between two creamier courses, its green curry sauce was bright and bold.

Cooper played against type, choosing the salad course (not pictured) as his favorite. His rationale was that he knows Cyrus can rock the octopus but the salad was more of a surprise.

It wasn't a traditional green salad - at all. White fruits and vegetables - apple, pickled mushrooms, tiny onions and cauliflower were scattered across a thick cylinder of marscapone. White on white...totally intriguing and full of surprising flavors and textures.

The rest of the meal was just as good. Adventurous and risky and never dull. Pique promises to be an exciting addition to Hampden (and, let's be honest, who doesn't love a BYOB?).

The Kickstarter has another week or so to go. If you're inclined to help support the local food scene, donating would be a good way to do so!
Posted by Kit Pollard at 8:06 AM

I just wanna say thank you for sharing the content and wish you all the best for your website and your whole team.