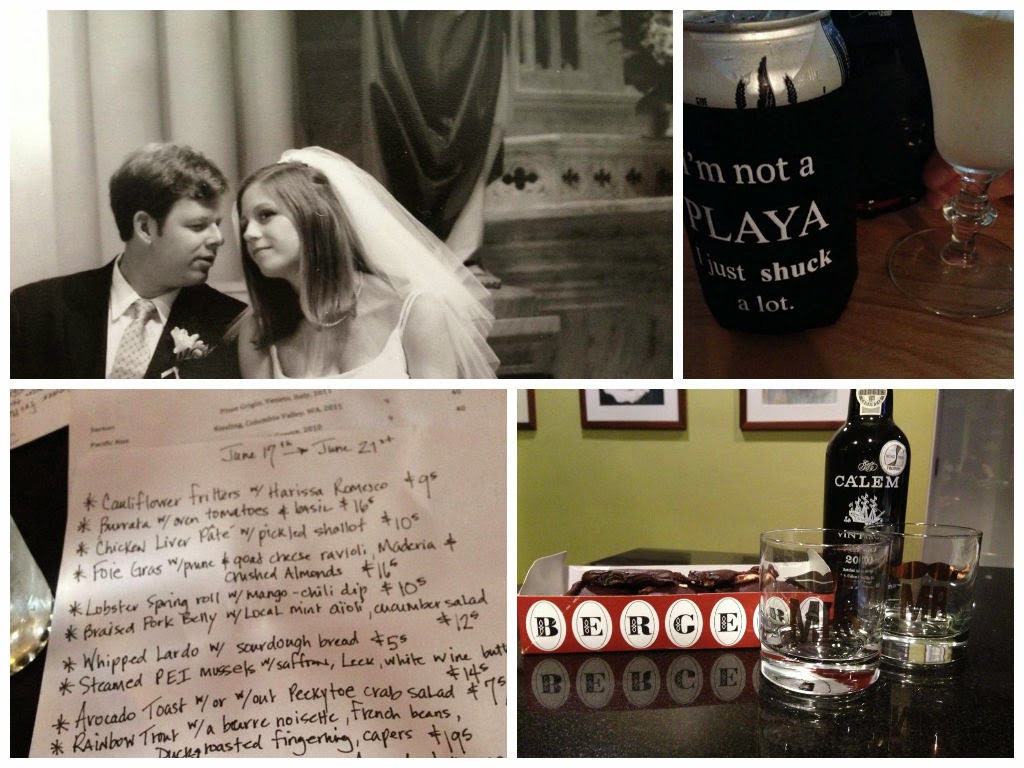 Last week, Cooper and I celebrated our tenth wedding anniversary.

My parents marked the occasion by going to Chart House in Annapolis, where our reception was. We, on the other hand, kept it in Baltimore, going out to dinner for the fourth night in a row.

We started with drinks and a shucker's choice dozen at Dylan's Oyster Cellar, the pop-up oyster bar in Mount Vernon. I've been dying to get there - and I wasn't disappointed. Cooper had a beer (we got to take home the sweet koozy) and I had a vodka and lavender cocktail that was so well-balanced. Our oysters - all from Virginia - were gorgeously shucked and both the cocktail and mignonette were seasoned just right.

It's a cute space and I'm sorry that they're not staying forever.

After oysters, we rolled over to Fells for our first trip to Peter's Inn. We've heard a million good things about the restaurant - our friend Dr. R has been trying to get us to go there for years. It's charmingly divey and the food was very good (especially the cauliflower fritters with harissa dipping sauce and my risotto carbonara with a duck egg on top).

I think, though, that our expectations might have been too high. We liked it a lot - there was nothing wrong with anything we ate - but I might have been expecting something transcendental. It's also possible that we were experiencing the tiniest bit of restaurant fatigue. (We'd been going out a lot...but we mostly took this week off from restaurants.)

After dinner, we tried to go to Vaccaro's for dessert but the line was out the door. Instead, we ended up back in Towson, hitting Royal Farms for Berger cookies, which we brought home ("What?" you ask. "You didn't enjoy them in the RoFo parking lot?").

With the cookies, we drank (some of) the bottle of Calem port we bought on our honeymoon, in Portugal. When we bought it, our plan was to drink it on our tenth anniversary. And it worked! Though neither of us is an enormous fan of port, we both very much enjoyed the way this bottle had mellowed over the years. It was sweet, yes, but in a good way.

And that was it. Ten years on the books. It's kind of crazy - when I look back, the two or three years before I met Cooper seem like to have stretched out forever, but the (almost) thirteen years since we started dating have gone by in the blink of an eye.

It's been a good ten years, though (a good thirteen years, really) - and so full of good food.
Posted by Kit Pollard at 7:41 AM

Happy Anniversary! And how cute are you in that pic!

I think cauliflower fritters with harissa dipping sauce are in my future.

Thank you! They were really good - the kind of thing you eat and think, "Why don't more people make these?" They're probably not even that hard to make...