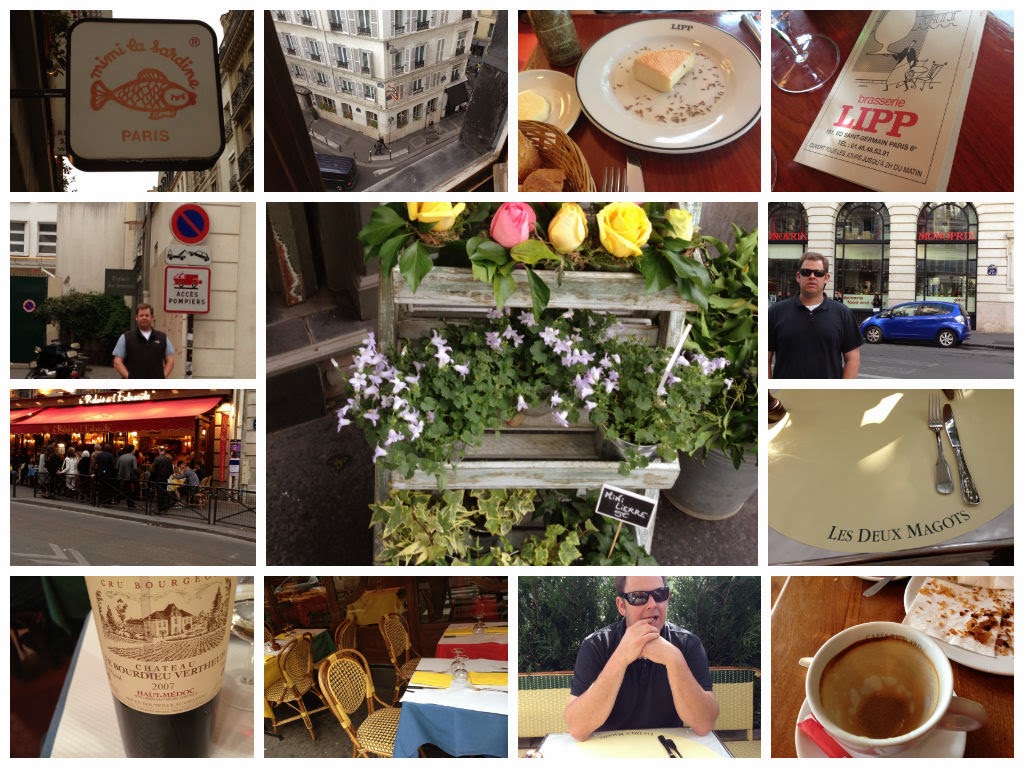 (Clockwise from top right corner: the menu at Brasserie Lipp, Cooper in front of the fabulous Monoprix - which is basically Target in Paris, the menu at Les Deux Magots, the remnants of our petit dejeuner, Cooper at Les Deux Magots, before the storm at Relais d'Entrecote, wine in the apartment, mid-dinner Relais d'Entrecote, towing in France, a sign mixing fish with Mimi - who is also our niece. In the center: flowers at a shop on the Rue Bonaparte.)

We are back, moderately rested, and already missing our little studio on the Rue de l'Odeon in St. Germain des Pres. We had such a great vacation - it was short but tres, tres sweet.

I have so much to write about - it's a little overwhelming, honestly. To make things easier, I'll write a single post about each day, then a wrap-up post with some overall observations and commentary. This will happen over the course of...well, who knows? I've been on vacation, which means I've got some catching up to do, work-wise.

So, to start - we left on a Tuesday afternoon, flying direct from Dulles to Charles de Gaulle. (As a side note, Vino Volo, the airport wine bars? Not bad!). We both slept poorly on the plane, though Cooper was pleased to watch a couple movies, and when we arrived in Paris at 7 a.m. on Wednesday, we weren't exactly feeling refreshed.

Still, the airport experience was about as easy as could be and the drive into the city was uneventful, despite rush hour traffic. Cooper's high school friend, Patrick, lives in Paris (he gave us tons of advice - including suggesting we stay in St. Germain des Pres - AND made all of our dinner plans). We couldn't check into our apartment until 1 p.m., so we headed to the place Patrick shares with his girlfriend, Amanda, to stow our luggage and say hello.

With that taken care of, Patrick headed to work and we hit the town, walking around St. Germain a bit before stopping for a restorative croissant and coffee. After another quick walk, we decided the croissant wasn't enough, so we settled in for a proper lunch at Les Deux Magots, the storied cafe on the Rue de St. Germain - a favorite Hemingway haunt.

The weather was gorgeous, so we sat outside on the patio, which feels private, thanks to high shrubbery, but still central to the city. I hadn't been before and thought it might be touristy - and maybe it was but it was still fabulous.

I ordered a glass of rose and Cooper had a Heineken, then we settled into our meals. For me, a tomato quiche that could not have been creamier, with perfectly flaky pastry, plus the sort of light green salad that everyone in Paris effortlessly produces. For Cooper, an omelet with ham that was the perfect introduction to the French genius with les oeufs. He was so tired...but totally happy.

After lunch, we realized we were going to pass out, so we went back to Patrick's for a little nap. Then we woke up, took a cab to our apartment, and took another nap. Nothing too long - just an hour or so. I unpacked and then we started to get a good look at our new home for the next few days.

We rented a studio apartment via airbnb - and I would do it again in a heartbeat. It wasn't big - but it was bigger than most of the hotel rooms in Paris. Plus, for the neighborhood, it was an absolute steal. The view was lovely and it was so close to everything we needed.

After our naps, we took a walk, walking down the Seine, checking out the crazy taxidermy and general oddies at Deyrolle, and stopping for a drink and the Crottin de Chavignol (tangy goat cheese served with cumin seed) at Brasserie Lipp (Hemingway haunt #2).

We then made our way to Relais d'Entrecote, which Patrick suggested as a good choice for our first night in Paris. (Knowing we'd be tired, he and Amanda both worked late on Wednesday then had dinner with us for the rest of the trip.)

Relais d'Entrecote doesn't take reservations and people start lining up well before its 7 p.m. opening. At 6:30, we were first in line - but we were only alone for about a minute. By the time the restaurant opened, there was a healthy line stretching down the block.

Understandable, too. It's not the typical Parisian dining experience - at Relais d'Entrecote, you get salad, steak frites and dessert. Your only choices are what to drink, what to have for dessert and how done you want your steak. That was exactly the amount of thinking we were in the mood to do our first night in France. We were tired.

Not surprisingly, the one thing they do, they do well. The fries were crispy and thin (McDonalds-esque - and I say that in a good way) and the steak was sliced thin and cooked perfectly. It's served with a fantastic sauce that I'm pretty sure includes lots of butter, something like anchovy, maybe some Dijon mustard and possibly parsley (something green). It was so good and I need to try to replicate it before I've lost the taste memory.

For dessert, we had a little strawberry custard tart - and I remembered that strawberries in France are, justifiably, legendary. So sweet, so juicy, so perfect.

After dinner, we stumbled back to our apartment, stopping at the wine shop/bar across the street to pick up a bottle of spicy red. When in France and on vacation, right? We each had a glass and fell into bed, exhausted, before 10 p.m.

Which was fine, since we had a big day ahead of us the next day, starting with the Arc de Triomphe and getting bigger from there. Stay tuned for that...
Posted by Kit Pollard at 9:19 PM

Jealous that you made it to Deyrolle! No pics for me??

No pictures allowed! Believe me, I was planning to take some until Cooper saw the sign - and also believe me, we talked about how much you would LOVE it there. It's crazy but so cool. I fell in love with these mounted antlers that are painted crazy colors. So cool...so crazy expensive.