Vintage Tuesday: This Is How We Rolls 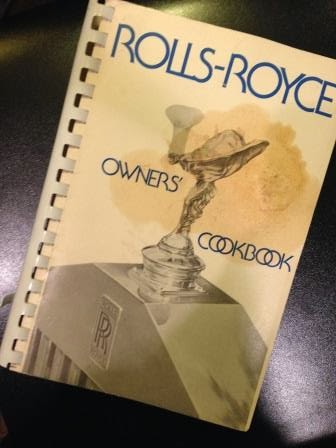 As promised, here it is: my first official "vintage" post, a weekly feature in which I highlight one interesting vintage cookbook or kitchen or entertaining item from my collection per post.

I'm starting with my newest acquisition which, like many of these cool and funny things, comes directly from my mother-in-law, who found it at an auction some time ago, and just re-found it in her own collection and passed it on to me.

The recipes included were collected from club members - much like your standard Junior League or garden club cookbook. What sets this one apart is the artwork - photos of the members' cars are sprinkled throughout.

Also like the standard JL or garden club cookbook published between the '50s and '80s, many of the recipes sound, well, kind of gross. Sardine finger sandwiches? Hot beef dip made with cream cheese, sour cream, dried onions and "one envelope dried chipped beef"? London broil smothered in havarti? Seafood a la king that doesn't actually specify what type of seafood it includes? All there. And, of course, numerous Jello salads.

But I wouldn't expect anything less. It was 1975, after all. The year of my birth...and of many a Jello salad.

Dude, that hot beef dip sounds good. Or maybe I was just distracted by the name....lol