This Week Around Here: December 27th to January 3rd

As promised, I am ringing in 2014 with weekly updates about what we've been up to on the food, drink and party front. I am hoping, desperately, that this will make it easier for me to actually blog about all the things I eat and do. So here we go. 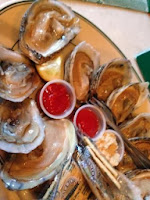 First, it's oyster season both in terms of "R" months and also because it's birthday-and-Christmastime chez Pollard. Between our house and my parents' house, we eat a ton of oysters during the winter, especially in December.

The bivalves pictured at the left are actually from last week - my annual birthday trip to McGarvey's. You know what I like about McGarvey's? Well, a lot of things, actually, but one of my favorite things is that it is so amazingly consistent. The food, the drinks, even the people don't change. And they shouldn't. Ever. 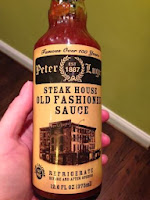 Speaking of old faithfuls, I've been reading a lot about classic steakhouses lately - including Peter Lugar, the Brooklyn restaurant that many consider the gold standard.

For Christmas, my mom gave Cooper a bottle of Peter Lugar steak sauce (her friend Debbie found it at Wegman's - it doesn't actually involve a trip to New York to buy). As much as I love condiments, I'm not big on steak sauces; as a general rule, I think steak can stand on its own (and if it can't...there's always bearnaise). But this sauce, which is tomatoey and tangy, is really good.

It's also obviously fresher than most other steak sauces - it has to be refrigerated even before opening and it only has a shelf life of a few months.

After Christmas, we spent a fun afternoon with my high school friends at the Severna Park Taphouse. I'd heard a lot about the new bar that took over Snyder's (a divey-divey-dive). And it was nice! Not like crazy nice or anything, but the space was cute and they have a great selection of craft beers. We also tried the Buffalo chicken dip (good, not too spicy), crab dip tots (overwhelmingly crab dippy - they were good but heavy) and rockfish tacos (really nice...and spicy, thanks to a squiggle of Sriracha).

The big story this week, of course, was New Year's Eve. Like last year, we opted to stay home, having a big fancy dinner with our friends...and their kids. 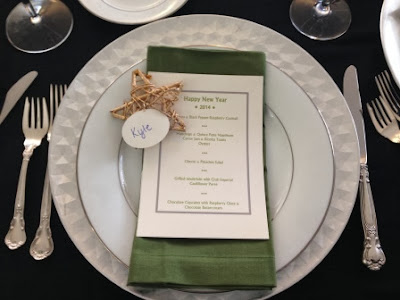 It's a bold move to try to have a sit-down with eleven adults and eleven kids. The oldest, Maddy, just turned eight, so she was a huge help at the kids' table, serving the littler girls and making sure no one got hurt.

The kids ate first (chicken nuggets and mac and cheese) then everyone old enough went downstairs to play, leaving us to actually enjoy our dinner. And enjoy we did. It was tight - the table is really built for ten - but that's okay.

The food was good, too. We had a handful of appetizers (including carrot jam with ricotta - I can't get enough of that stuff), oysters (obvs), grilled ribeyes, crab imperial (using the very spicy recipe from my old school crab recipes article from last spring) and pureed cauliflower.

The original plan involved tenderloin but BJ's was fresh out on the morning of New Year's Eve, so I improvised, buying a gigantic slab of ribeyes then trimming and cutting the whole thing into steaks. It was a) time-consuming and b) nerve-wracking. I didn't want to screw it up and be wasteful - but I also didn't really know what I was doing. In the end, I think everything turned out okay.

Overall, good times. Nearly everyone made it to midnight - the only stragglers were Scarlett and Charlotte, who are both under one, Hadley, who conked out on the sofa around eleven, and Will, who fell asleep at about 11:55. Oh, and Kyle and Mary and Evie, who had to leave before ten because Evie is too much of a party girl to go to sleep but, at not quite two, really not old enough to stay up late.

So it's been a good week...and next week we have even more festivities planned. Kyle's birthday, Charlotte's birthday and - hopefully - a full week back at school and work. Fingers crossed.
Posted by Kit Pollard at 11:36 AM