This week, when I wasn't busy making a big pot of beer for dinner, I actually ate pretty well. On Saturday night, we just ordered pizza from Toss with a couple friends (the Toss special + Greek salad is our go-to order and I continue to be thankful they opened in our delivery area.).

But before the pizza arrived, we polished off most of a jar of Mary's parents' neighbor's jalapeno jelly. That stuff never gets old - I could eat piles of it. In fact, before coming over, Kyle and Mary had dinner at Cunningham's...and they still ate a bunch of jelly at our house. The guy who makes it, Doug (aka Frito), is one of the nicest, funniest guys around, too. Though I'd eat the jelly even if he was a jerk. It's so good.

On Sunday, Audrey and George and their kids and Audrey's mom all came over for a big, fun dinner. Audrey and I had just been reminiscing about a long-ago dinner we had with another family, the Pennells, who have since moved to Charleston. That night, the stars aligned, the kids (who were four and under at the time) were amazing and we had so much fun. We remembered the meal as delicious, too, though I couldn't be sure how much the memory was influenced by the night being fun all around. (And by the wine.)

I tracked down the recipe I made that night - Martha Stewart's conchiglie with shrimp, roasted tomatoes and zucchini - and discovered that it was, in fact, as good as we remembered. I doctored it a bit, using orrechiette instead of conchiglie and going half crab, half shrimp for the seafood. But it was great. Highly recommended, though it does involve last-minute cooking, which isn't always easy. 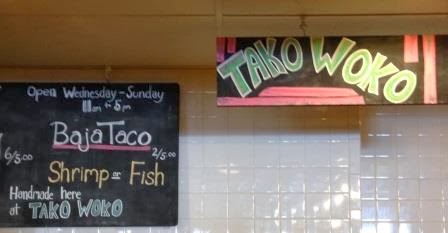 On Wednesday afternoon, I hit Belvedere Square for some ravioli (standard cold weather meal around here) and, while I was there, decided to check out Tako Woko, the pop-up taco and dumpling shop that's opened in Ikan's old space. I am super sorry to see Ikan go - I ate the hell out of their sushi bento boxes - but I also completely enjoyed both the dumplings (shrimp and pork) and tacos (shrimp and fish - both fried).

Finally, last night, Tommy came over with his ladyfriend, Sarah, and they cooked us dinner. That, obviously, is always welcome - and it was great. Grilled swordfish, roasted asparagus and a crispy rice dish with pine nuts and dill and a bunch of other things. Both the fish marinade and rice were Barefoot Contessa recipes and both were fantastic.

I can't tell you when I last ate swordfish, either. We started talking about it and everyone remembered their parents eating it - mine ate it all the time. But I don't see it on nearly as many menus as, say, 25 years ago.

I wonder if that will change, though. It's very sustainable and really hearty and can stand up to strong flavors. I bet now that I've eaten it once, I'll see it everywhere.

Up next for us: a big night out in Fells for our friend Sean's 40th and, of course, the Super Bowl. Lots to do this weekend!
Posted by Kit Pollard at 10:08 AM

Labels: dinners with friends, this week