Weekend Eating: On the Road Again

We spent the weekend up in Ebensburg, PA, at Mary's family reunion. But before we headed off into the north, we did some really good eating.

Friday night we met the Bargers for dinner at Earth, Wood and Fire, a Falls Road pizza place tons of people told me I should try. We ended up glad we did - it was super family-friendly and the pizza was very good (especially Mike and Alicia's pepperoni and ricotta pizza). The non-pizza was good, too - we loved the fried green tomatoes with corn salsa.

Saturday morning, Cooper, Dixon and I piled into the RV to head up to PA. We left an hour earlier than originally planned (that never happens) but we didn't eat before getting on the road. We'd just watched a show on MPT about Pennsylvania diners (yes, random for Maryland's PBS channel), so we thought we'd stop at a diner on the way.

We take 70 most of the way to Mary's parents' house. Once we got on the road, Cooper said, thoughtfully, "Hmmm...maybe we should go to Family Meal instead of a diner."

When you can go Voltaggio, you should.

We texted Sarah G., who lives in Frederick, and even though it was barely 8:30, she texted us back and said she'd meet us at the restaurant. We had time for photo ops with the RV: 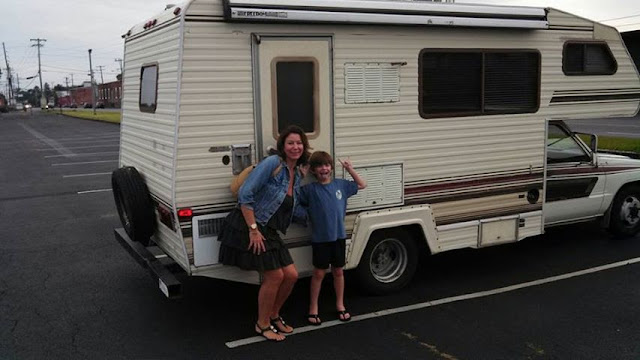 And we had a killer breakfast. Mine was tiny bay scallops scattered over eggs with thin slices of hard chorizo. Amazing stuff - but Cooper's Cuban-inspired omelet (dijon sauce and pickles) was even better. It was a great call.

I'll write a separate post about the reunion itself - Alicia and I took lots of pictures, mostly of peppers and blueberries. But on the way home, we finally did hit one of those diners: the Bedford Diner in Bedford, PA. From the homemade sticky bun to the ginormous slab of scrapple, it was awesome. Very highly recommended.

You never really know what you're going to get when you walk into a restaurant. Well, OK, when you go to a Voltaggio restaurant, you can probably reasonably assume it'll be good. But a diner off the Pennsylvania Turnpike? You're rolling the dice.

This weekend, we got lucky. All the way around.
Posted by Kit Pollard at 8:19 AM