This past weekend, we celebrated Kyle and Mary's wedding - a beautiful and happy occasion all around. Plus, the food and drinks were fantastic. This morning, I thought I'd share a few pictures of the events surrounding the wedding, starting a few days ago: 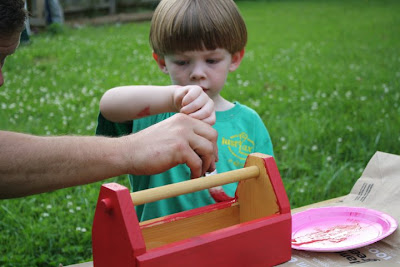 That's Dixon, in our backyard, painting the toolbox that Kyle and Mary got him to carry down the aisle, in his official capacity as ring bearer (or, if you ask him, "ringmaster").
The rehearsal dinner, held at Sammy's Trattoria, was fun and kind of fantastic: 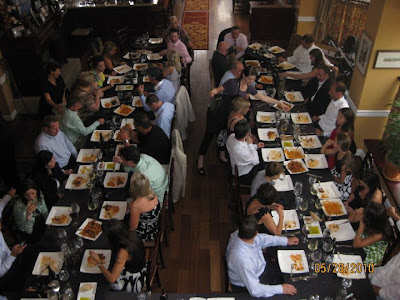 Actually, the rehearsal dinner meal was probably my favorite of the whole weekend. Everything was served family style, starting with antipasti and appetizers of tomatoes, mozzarella and basil, shrimp scampi, sausage and peppers, and a lovely salad. That would've been more than enough right there, but we also had penne in vodka sauce and penne with eggplant, chicken parmigiana, and chicken piccata. Unsurprisingly, everyone was stuffed when we left the restaurant.

It really was an impressive meal, though, especially since everything was cooked absolutely perfectly - no mean feat when you're serving 50 people all at once. Even the shrimp was perfect.

On Saturday, the ceremony was beautiful and very nice: 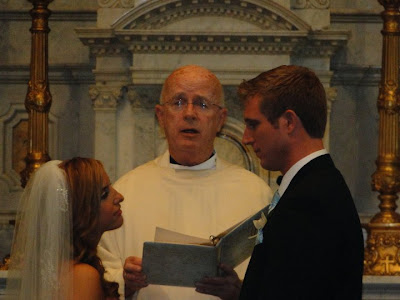 Father Nash, the priest who married K&M, is from Loyola University, where Kyle's been helping coach soccer for the past few years. He was personable and touching.

Much to my relief, the kids did a great job walking down the aisle: 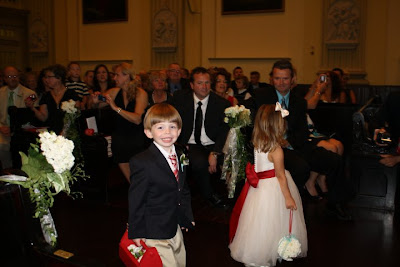 To say I was proud would be an understatement. But still, I was also relieved when their babysitter picked them up, so we could enjoy the reception without worrying about anyone under five.

The reception, held at the Tremont Grand, was fantastic (especially the music, which was all hand-picked by Mary). As far as I can tell, everyone working at the venue was on top of things, friendly, and responsive. Plus, it's pretty there! And look how cool the centerpieces were: 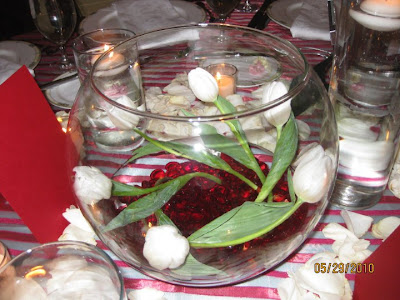 Mary was looking for something sophisticated and a little different - I think she got it.

Finally, this is about how everyone felt by the end of the night: 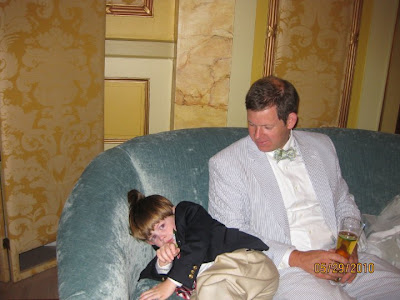 Of course, the end of Dixon's night came around 8:30, while Cooper and I made it about another seven hours. It was a long one.

We finished out our weekend with a trip up to Pennsylvania to visit our friend Sam and his extended family, and with a low-key cookout at our house yesterday (most of which was dedicated to recapping the wedding and eating rehearsal dinner leftovers). All in all, a good one.

Mary and Kyle are about to head off to Napa for their honeymoon, while we all stay behind and continue to recuperate. We've been looking forward to this past weekend for so long that it's a little hard to believe it's over. But now it's on to plans for the beach and the fourth of July...because it's always something!

[The pictures were taken by a combination of people - me, Alicia, and Kyle's mom's best friend, mostly, I think.]