As I mentioned a week or so ago, one of my favorite things about Facebook is that it allows me to nosily watch over he comings and goings of about 150 of my high school friends. I am a crazy busybody, apparently. 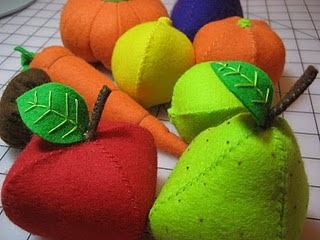 But Facebook is good for more than gossip. As it turns out, some of my old friends are involved in very cool creative pursuits. My friend Vanni, for example, has a relationship with her sewing machine that most girls today just can't imagine - and the kind of dirty mouth that most nice sewing girls really can't imagine.

Since my domestic talents are largely confined to the stove, I'm a little in awe of anybody who can cut a pattern and construct something cute with ease. Vanni can. She's opened a store to sell her wares - raunchy burp cloths, cute fruit (as in the photo above) and hairbows (both traditional and cheeky - if you ask, she'll embroider them with charming words like "slut" and "trollop.") In addition to the store, Vanni's started a blog about sewing and crafting. It's called Puckleberry Loves to Craft. 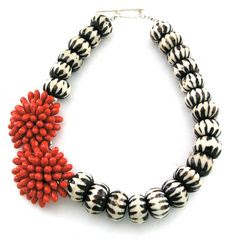 You should check it out.

Jewelry-making is another talent that a) I am sorely lacking and b) is awesome. Last week, Cail sent me a link to her college friend's website. Her friend, Emily, studied jewelry design after college and now makes some outrageously fabulous one-of-a-kind pieces, often using vintage elements in her designs. Her company is called Elva Fields, after her great-grandmother, and she's developed lines using her mom's and grandmother's names, as well.

The pieces sell way too quickly, but they're worth watching - if you keep a close enough eye on the site, you just might bag one.

OK, so one is a friend of a friend/relative and the other is a high school friend I haven't seen in years (except in pictures). But still - look at all the creative people around me!

And you sorta know me (even though I did not go to HS with you) - I am not only a graphic designer but I also make jewelry.