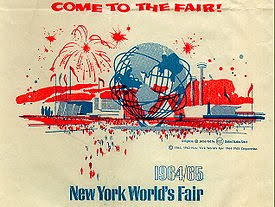 Today is National Jelly Bean Day, which I’m sure made Ronald Reagan very happy. In unrelated news, I was at the playground a couple of weeks ago and overheard a mom calling her two children. Their names were Carter and Regan. I got the feeling that the joke was lost on her, but I’m not positive.

Anyway, in other news, today is all about the French influence. Today in 1948, Prosper Montagne passed away. Despite his totally Puritan first name, Montagne was a celebrated French chef and was the creator of Larousse Gastronomique, the encyclopedia of French cooking that’s still considered definitive (in its updated form).

Sixteen years later, in 1964, the New York World’s Fair opened – again – in Flushing Meadows, Queens. The first use of the site, in 1939, ushered in a golden age for New York dining, as numerous French chefs coming to work at the French pavilion stayed on in Manhattan after the fair ended - in part, since World War II had made such a mess at home.

Speaking of messes, the 1964 World’s Fair seemed to be one. The fair’s creator ran afoul of Bureau of International Expositions rules, causing the BIE to withdraw sanction. This meant that member nations, including Canada, Australia, and most of Europe, did not participate. In addition, there were logistical problems (like the absence of a midway) that made navigation difficult, and as the fair closed, it did so amidst financial controversy (and a lousy return for investors).

That said, I’m sure it was entertaining for all who attended.

So…to celebrate? Pull out Larousse and make something, of course. Then stick a few jelly beans on top. Ronnie would like that.
Posted by Kit Pollard at 7:42 AM

My mother liked to tell me that I was at the '64 Worlds Fair and she would reminisce about the first time she tried Belgian waffles.

"Do you remember them, Kath?"
"Nope. The amniotic fluid killed the taste of everything!"